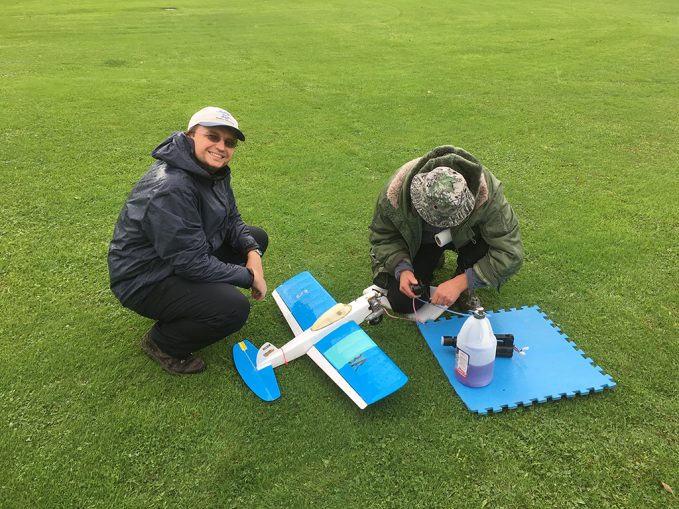 Last Saturday (Oct. 6), I hosted the Upstate New York version of the 2018 Worldwide Ringmaster Fly-A-Thon at the Syracuse Thunderbirds Aero Radio Society (STARS) flying field in Phoenix, New York. We had 6 pilots, including the Vasilik brothers from Rochester, show up to fly Ringmasters. Despite a 45 minute rain delay at the beginning of the event, we managed to have a great time flying. Once the rain did it’s thing, we ended up with good flying weather and spent several hours flying Ringmasters. By the end of our event, we had posted 15 flights by 6 pilots with 2 Ringmasters all of which were submitted for inclusion with the world wide tally.

Highlights of our day included flights by 3 first time pilots! The Shubsda family, which included father Mike, daughter Danielle, and son Alex, all showed up with their restored Ringmaster to fly. All 3 of them posted ‘first’ flights which gained double credit towards the tally for total number of flights. The general consensus was that Danielle performed ‘Best in Class’ with her first ever flight. She was as cool as a cucumber!

Unfortunately, the Ringmaster they brought never made it into the air. It had belonged to Mike’s father and the last time it flew was sometime in the late 1950’s. Mike and Alex had worked to restore it over the summer and while the plane was ready to fly, the Johnson .35 that was installed on it refused to cooperate. After 45 minutes of intense efforts to start it failed, the plane was put back in the hanger to fly another day.

Another highlight of the day’s events included a great Combat demonstration by the Rochester Vasilik brothers. Andrey flew a combat wing while Jerry engaged a Ringmaster Sportster against it in combat. Believe it or not, the Ringmaster won which was very fitting for the day!

We all had a great time flying Ringmasters which is what this event is all about. Enjoy the following photos and video of our event! Rain or shine the Ringmasters must fly! Mike with Alex in the circle about to take off for his solo flight. Despite the efforts of Jerry and myself, we could not get the Johnson .35 to start thus Alex’s restored Ringmaster did not fly this day.