Home The NEW Marine One! 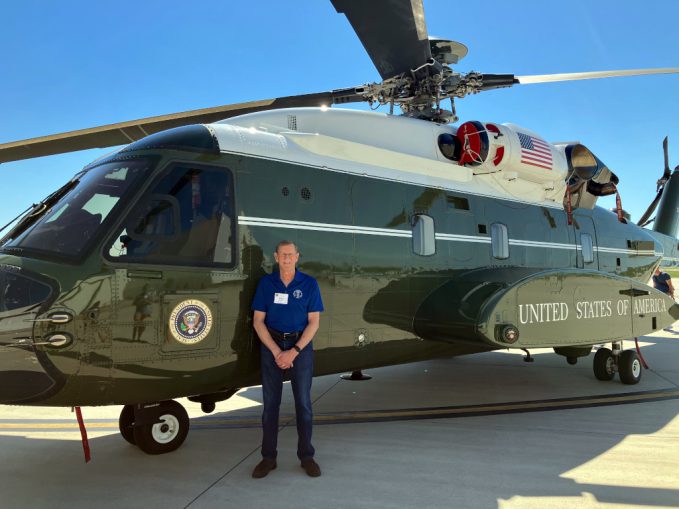 On June 3rd and 4th, I attended the Marine Helicopter Squadron One (HMX-1) 75th Anniversary Reunion at Marine Corps Air Station, Quantico, Virginia. This was a 2-day event that included a special ceremony on Friday where the current VH-3D Marine One was transitioned over to the new VH-92A Marine One. On Saturday, there was an ‘Open House’ at the squadron hanger where alumni could look over all the helicopters while reconnecting with old squadron shop mates. The 2 days were topped off with an Anniversary dinner in Fredericksburg.

The highlight of the events was being able to look over the new Marine One ‘up close and personal’. Of course, everyone wanted their photo taken standing alongside the iconic Presidential Seal that adorns the side of the helicopter, and that included me! Of particular interest to me was the paint job which is something that I used to help maintain. Let me just say that this new paint job is flawless and beautiful.

One interesting thing that I did note about the new helicopter is that the main entry door is located on the opposite side of the helicopter from the old Marine One. This means that when you watch the President board or depart the helicopter as it sits on the White House lawn, the helicopter will be facing the opposite direction than it has faced for the past 50 years!

I have prepared a video that highlights the reunion events as well as presents some photos of the new Marine One. There is a comment that I made 5-years ago during the last reunion which I heard several times throughout this weekend. And that is that being back at HMX-1 feels like being ‘Home’ again. I look forward to returning ‘Home’ once again at the next reunion.