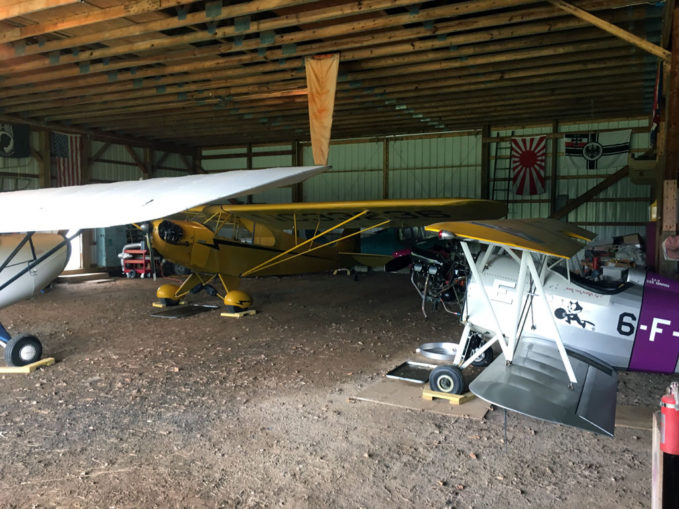 Chuck Burtch does not have to imagine any of that since that is exactly what he has! I met Chuck today thru our mutual friend, FlyBoy Steve Dwyer. Chuck is a member of the local EAA Chapter, which I have written about before here in FlyBoyz, and knows Steve thru their mutual affiliation with the EAA. Steve had arranged for me to meet Chuck at his place so that we could check out his full scale and model planes and also for us all to get in some control line flying from the airstrip.

Chuck has an impressive aviation background. And it turns out that he and I have a couple of those early background things in common. Chuck started out in the Navy as an Aircraft Structural Mechanic which was the same MOS (job) that I had while in the Marines. And it turns out that we both attended the same naval aviation school in Millington, Tennessee although Chuck pre-dated me by several years. After the Navy, Chuck went on to a civilian career as a pattern maker but keep up his aviation activities. He earned his flying license as well as a full A & P Mechanics license and more recently he added an IA (Aircraft Inspector) certification to his list of accomplishments. He has built, restored, and repaired numerous aircraft and has been very active with the EAA including being an active participant in the annual EAA Oshkosh fly-in. He also built the two aircraft hangers that adorn his property. And over the years, he has been an active model airplane model builder and flyer. A walk thru Chuck’s workshop and two hangers is a walk thru 50 years of aviation experience and history. Aviation runs through his veins! The view down the runway at Rabbit Lane Airport The view in the big hanger Smith Miniplane done up as an F4B-4 Biplane Chuck was a gracious host. Not only did he spend time showing us his planes and equipment, he even cut the grass on the airstrip prior to our arrival so that we could fly our planes from it! After the shop and hanger tour was over, Steve and I pulled out our planes and set up for a great flying session from the airstrip. Steve managed to arm twist Chuck into taking the control handle for the first flight of the day. Chuck had flown control line before, but like many of us, his experience with it was many, many years ago. His concern was getting dizzy and losing control of the plane. To help alleviate that concern, Steve parked a lawn chair in the middle of the flight circle and sat there in case Chuck needed a relief pilot. Chuck made a great takeoff and flew a half dozen very nice laps but then the dizzy kicked in! Steve came to the rescue and Chuck enjoyed the remainder of the flight from the lawn chair. It was quite a comical sight! This sequence of photos shows Chuck experience. Chuck…we’re not laughing at you, rather, we’re laughing WITH you! Chuck is airborne and flying nicely The handoff of the flight controls Enjoying the rest of the flight…from center circle

Once Chuck was done, Steve and I commenced to enjoy a half dozen flights with our various planes. The highlight of those flights was Steve’s flight with his newly built Primary Force. The plane looks beautiful. Steve had recently flown it on a maiden flight but today was the planes first public flight. It appears to be a good, smooth flyer, but the flight was not without incident. Chuck performed the launch crew duties and Steve proceeded to put the plane thru several minutes of successful stunts. However, near the end of the flight, something tripped up Steve and he fell over backward! He did a great job maintaining control of the plane while picking himself up off the ground. Watch for Steve’s acrobatics and recovery starting at the 6:00 minute mark in the below video. Like all good aviators, once the flying was over with, it was time to ease back and recount the events of the day and the tall tales of many years ago. I think this last photo says it all about the scenery priorities of us aviators while recounting those tales! I want to thank Chuck for his hospitality and for being such as great host (as well as a good sport!). We all had a great time today and I look forward to meeting up with him again…and that should be easy since he only lives 7 miles from me! As close as that is, it doesn’t beat having your own private airstrip in your backyard!