From Pilot to Model Airplane Enthusiast. A Bilingual Post from South America!. 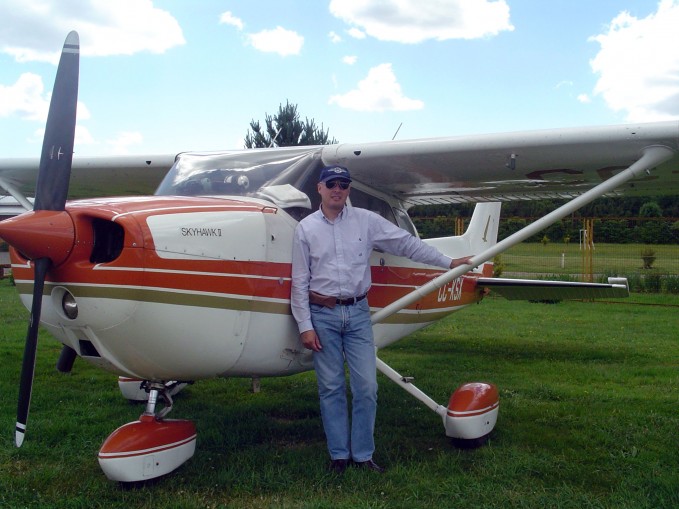 Several months ago, I was introduced to Claudio Elicer Avalos via some photos of a PA-28 model that he posted in a Free Flight Group on Facebook. Claudio was building the PA-28 and was documenting his build via a series of photos. I was impressed with the level of craftsmanship that was evident in the photos and struck up a conversation with him related to his build. One thing led to another and I finally asked Claudio if he would be willing to share his building and flying experiences with others via a FlyBoyz Guest Post. Claudio graciously agreed to do so.

One thing that excited me about this post was the thought that it would represent a great opportunity to learn about modeling and flying in another country, in this case in Chile, South America. Claudio lives in Santiago, Chile and I was curious to learn about differences, if any, to how modeling and flying is approached in that part of the world. One difference is language. In Chile, Spanish is the primary language. Fortunately for me, Claudio has a very good grasp of the English languish so communication between the two of us has not been an issue. When it came to his FlyBoyz post, Claudio elected to write it in his native Spanish and then the two of us collaborated on the English translation of it. This Spanish to English translation gave me the opportunity to try out a FlyBoyz first…a bilingual article!

Claudio’s post is actually being broken into two posts, this first one is focusing on his full scale aviation experience and the lessons he applied from it to his model flying. The second post will feature his awesome build of his PA-28 model. Both posts will be presented first in our English translation version and then the post will be repeated in Spanish exactly as Claudio wrote it. I hope everyone enjoys these posts and appreciates both Claudio’s efforts at preparing them as well as the level of craftsmanship he displays in building his PA-28. Please feel free to leave comments to Claudio.

Here now is Part 1 ‘From Pilot to Model Airplane Enthusiast‘ of Claudio’s report from South America!

From Pilot to Model Airplane Enthusiast

If you ask me how long I have liked airplanes, I’d say from 4 or 5 years old, when I received the gift of a kit to build, a model with a rubber engine. I just remember it was a profile type fuselage with wings and paper structure. Perhaps this simple event marked my beginning. Then I decided to be a pilot, because it was obvious to me my passion for flying. As an adult, I got my civilian pilot’s license, and I thought this would be an activity that would accompany me throughout my life. But after 250 hours, I realized that I my time as a pilot had passed, and there were other flights that I was really looking for the rest of my life.

I began my life as a civilian pilot in 1995, and flew as much as my wallet allowed me to. In Chile there are several air clubs where you can learn to fly and use the planes belonging to the clubs. Here there are very few who have the privilege of flying their own aircraft, although I think if you want to fly a couple of weekends a month, it is a very good alternative. My training was hard, much harder than I imagined. I even went so far as to think that I would not be able to get my license after 40 hours, since I received few congratulations from my instructor, but eventually I realized that he just wanted to be sure that I was prepared, and for that I had to demonstrate to him that I would be capable of solving complicated situations for myself … and I finally succeeded.

In my career, I learned that a pilot who has not had any real emergency is not a real pilot … And I had three emergencies that put me to the test: the first was due to a short circuit that produced a lot of smoke in the cockpit, by a capacitor that burned. Immediately, I shut off the Master and everything calmed down, but the radio and all electrical instruments stopped working. The second time, I landed on an uncontrolled track close to the sea, with a headwind so strong that the plane began to lose altitude without much progress. I had to apply full power of the engine to get to the track … I had never done that before. The third and hardest was also on an uncontrolled track, where I landed with the wind, very strong, and the brakes failed to stop the plane. I was forced to abort the landing by applying full power, when we had already exceeded half of the track … the track ended and the speed of the plane did not reach the green arc (Green Arc) … again I did something I had never done before: I rotated the plane without the speed necessary to do so, the stall alarm sounded stronger than my heart. It was horrible. I remember that the plane, a Cessna 172, rose enough to exceed the wire fence and then began to fall, so I lowered the nose for the aircraft to increase its speed, lucky for me because the ground sloped down toward the lake, which allowed me to not crash to the ground.

Path of the approach and aborted landing, Lake Rapel

Since that time as a pilot, I became obsessed with building free flight models, but models I had personally piloted, such as Cessna and Piper classics that were my favorites and I knew very well. From this I can say that the differences in the way you fly both types of aircraft is observed in the models; the Cessna, a plane very stable but slower to react, and the Piper, a plane less stable but more maneuverable, both very good.

At present I live in Santiago, the capital of Chile, a country worth knowing, with a long and narrow geography, which possesses all the climates of the world and an infinite variety of sceneries, with beaches and mountains an hour away. I had the privilege of knowing my country from the air. Lake Maihue, Chile from the air

Some Tips That Aviation Taught Me

The pilot activity allowed me to understand some aspects that later applied to my free flight models, which I had been building since before becoming a pilot. I want to highlight 5 points to take into account to be successful with free flight models:

For a free flight rubber model, unless radio control systems or clockworks are used, control planes must be set in position before takeoff. If we add the effect of the variable power delivered by the engine rubber, with all its power at the beginning of the discharge, and gradually decreasing over the next few seconds, achieving a stable flight, both mounted, level flight and descent in gliding, it becomes an almost impossible task.