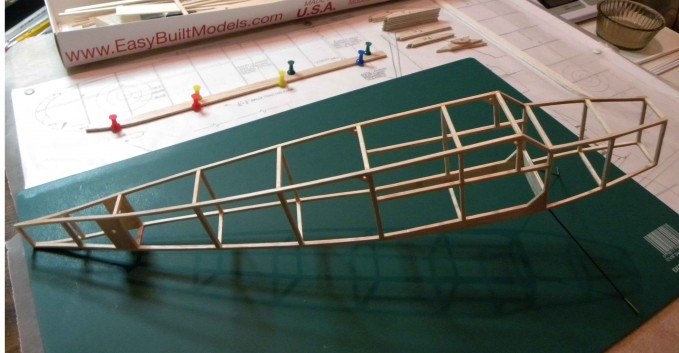 Over the past few weeks, I have been working on the Junior Commercial kit that I purchased from Easy Built Models while I was at the Flying Aces Club (FAC) 2014 NATS event a couple months ago. The Junior Commercial is a free flight rubber powered endurance model with a 25″ wingspan. This kit is much simpler than the Kharkov that I built earlier this year and it has been a fun build so far. And unlike the Kharkov, there has been a minimum amount of ‘re-building’ needed as I have been working on this. Most of the ‘re-building’ that I experienced on the Kharkov was due to my shaky hands (Essential Tremors) and bad eyesight (old-age!) as well as getting used to working with such small, delicate balsa parts. To date, I’ve only needed to ‘re-build’ a couple minor fuselage stringers and a wing rib all of which repaired quickly and easily. This has resulted in a much better looking model to this point.

What has also contributed to a better looking model are the little tips and techniques that I have been applying during this build. I garnered these tips and techniques over the summer during my conversations with other free flight model builders and I am very pleased with the results so far!

Despite having better luck on the construction and appearance fronts, I still tend to be a slow builder. To date, I have invested 35 man-hours in the build that you see in the below photos. I am hoping to have this plane completed in 50 hours which would be less than 1/2 the time I invested in the Kharkov. We’ll see how I do on that front.

There is not a whole lot involved with this kit so there are not a whole lot of photos associated with it. As a result, the photos below pretty much sum up the state of the build so far (click on the photos to get a larger image). The next task is to cover the model. I’ll do another build update once the plane is covered. P.S. ‘Build Report 01’ for the Junior Commercial was contained within FlyBoyz post: 3 Builds At Once.