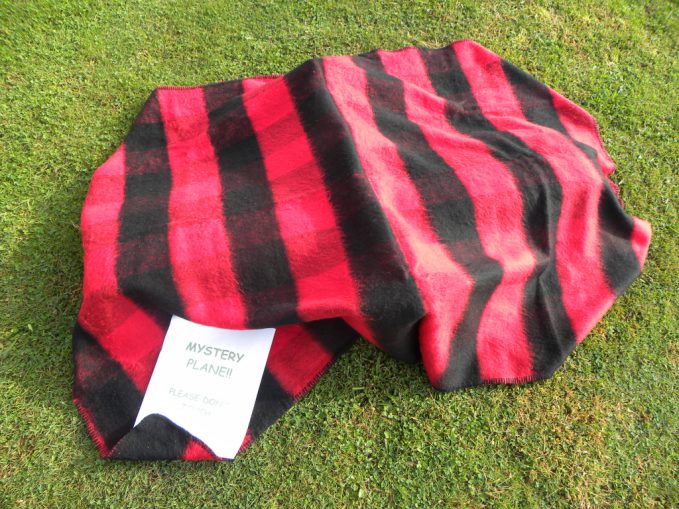 Several years ago, knowing of my interest in restoring old model airplanes and my love of the P-40 Warhawk, Steve Dwyer ‘gifted’ me an old P-40 control line stunt plane he had built as a 14-year old back in 1960. The model had been banging around in his attic for years, was missing the original McCoy .35 engine and canopy it had when first built and was in deteriorating condition. The plane then banged around in my basement for the next few years until I finally decided to restore it and ‘reveal’ the restored plane at this years Ringmaster Fly-A-Thon in early October. In order to ‘hype’ the restoration a little bit, I started making veiled references to it in several FlyBoyz posts over the past few months referring to it as the ‘Mystery Plane‘. Finally, on October 3rd, at this years Ringmaster event, I ‘revealed’ the ‘Mystery Plane‘…the restored P-40 Warhawk.

As part of the restoration, I wanted to keep everything as original as possible and that meant securing an old McCoy .35 Stunt engine to replace the one that had originally been installed in the plane. Finding a replacement engine was no problem given all the engines I’ve collected as part of my inventory for the FlyBoyz Store. I took an engine out of stock and proceeded to disassemble, clean, and lubricate the engine. Once complete, the engine turned over with great compression and a very satisfying ‘pop’ when cranked with a propeller! I decided to install it without any bench testing or break-in…a suspect decision…but one that proved to not be an issue as the engine started easily and ran great during the maiden flights of the plane.

The plane restoration itself went pretty straightforward. The biggest ‘issue’ I had was the removal and replacement of the original fuel tank. Given the condition of the original fuel lines, I knew the tank itself would not be suitable for use in flight. Unfortunately, the tank was buried in the built-up fuselage, however, its removal proved to be easier than I anticipated. A new tank and fuel lines were installed and the remainder of the restoration went on pretty much without hitch. Until I went to apply the replacement decals. The decals I had to put on the plane were as old as the plane itself and disintegrated as soon as I put them in water. I ended up ordering new decals but this meant that the plane would not be totally finished for the October 3rd. Fly-A-Thon. I decided to fly the plane anyway and complete the finishing of it after the event.

The ‘restored’ plane was hidden under a blanket until the time came to ‘reveal’ it at the Fly-A-Thon. After the reveal, 2 ‘Maiden’ flights were conducted, the first with Steve as the pilot, followed by one with me on the control handle. Both the plane and engine performed well during the flights and I was very pleased with both.

The new decals arrived a couple days after the Fly-A-Thon. They were applied along with the final coats of clear dope and an ounce of balancing weight to the tail end of the fuselage. The only thing still missing is a new canopy. I have been unable to locate one of the proper size. Ultimately, I will probably have to manufacturer one myself…something which I have never done before. In the meantime, the ‘completed’ plane has been placed in the ‘hanger’ with my other ready-to-fly planes waiting for the next event to show off it’s new, fully restored condition!

I found restoring this model plane to be very rewarding and fun. It is always a good thing to keep an ‘old and worn out’ vintage model plane from being added to the trash heap when nothing more than a few hours and dollars can result in restoring it to its former glory. If you think that you’d like to build a vintage plane and enjoy the rewards that go along with it, there is a large selection of planes available to chose from in the FlyBoyz Store. Just click here to check them out: The FlyBoyz Store.

In the meantime, I’ve prepared the following video which documents the restoration that I have briefly described above. Enjoy the video. And fly Control Line!