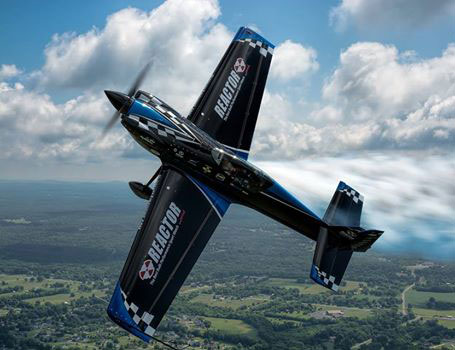 One of the great flight performances that I witnessed during the recent Geneseo Airshow (Event Report: Geneseo Air Show) was Rob Holland flying an aerobatic routine in his MXS/RH plane built by MX Aircraft in Wilkesboro, NC, USA. This show was like watching a modern 3D radio control aircraft only one needed to realize that this was a real plane with a real pilot at the controls. At this point, I am not sure who is imitating who…is Rob Holland imitating 3D R/C or is 3D R/C imitating Rob Holland?

Rob has a slew of aerobatic championships under his belt including being the US National Unlimited Aerobatic Champion for  2011, 2012, and 2013! His flight demonstration clearly showed why he is a champion. To me, Rob’s flight demonstration was reminiscent of the old time flight exhibitions of a hundred years ago and written about in the recently published book ‘Birdmen‘. One of the aerobatic stars of that early aviation era was Lincoln Beachey. If one wants to recapture some of the excitement that Beachey thrilled aviation crowds with 100 years ago, all one needs to do is watch Rob Holland perform.

For those that may have missed the Geneseo air show, a video of Rob’s Geneseo performance has been released and is featured here on FlyBoyz.

You can see more of Rob online at his website http://www.ultimateairshows.com as well as on his Facebook page http://www.facebook.com/ultimateairshows. Rob’s website features his performance schedule. Check it out and see if he’ll be performing at a venue near you…it would be worth the admission price to see him!