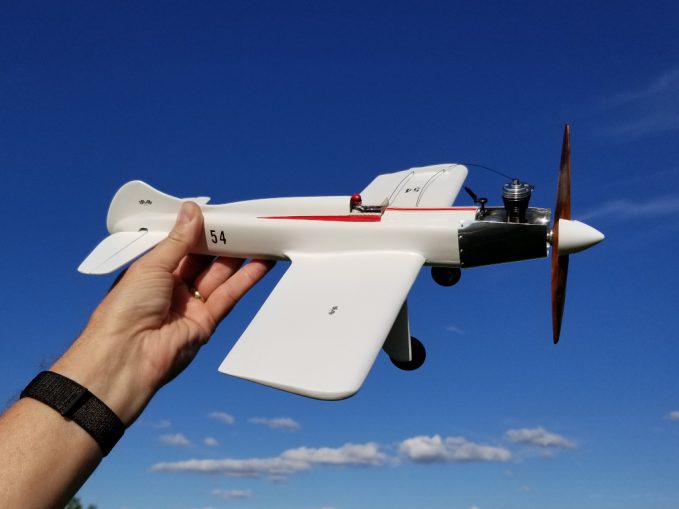 I am partial to 1/2A Control Line planes and I love the small COX .049 engines they use. While taking inventory of a collection I had acquired for the FlyBoyz Store, I came upon a vintage 1950’s L’il Darlin’ kit made by Enterprise Model Aircraft. The model is loosely based on those great 1930’s Golden Era race planes. Given that many of my favorite planes are from the Golden Era, this one really caught my eye. I thought it would be a great plane to start practicing some of the better modeling and finishing skills I had been watching in Windy Urtnowski video’s. I thought that this plane might look really good with a high gloss ‘Windy’ finish applied to it. So it went into my personal collection!

I started the build back in January but didn’t get too far with it and it sat on the work bench for a few months. Once I decided on implementing my ‘Plane of the Month Club‘ approach to building my model collection, it went on the short list of planes to complete. Given the nature of the kit, I figured it would be a quick build that could quickly satisfy one of my monthly builds. Well, let’s just say that I NEVER build anything ‘quickly’! I picked up the build in earnest in early August, and by the time I finally finished it yesterday, I had invested approximately 60 hours in the entire build! Any sane person would tell you that is at LEAST 40 more hours than anyone in their right mind would invest in this build, but, hey, now that I am retired, I suppose that I can invest that much time in a simple little build. And the plane came out pretty good in the end (I’m giving myself a B+ on it) and I enjoyed the build!

There were a couple points during the build that resulted in many extra hours spent correcting mistakes. In particular, the final coat of clear dope ended up picking up a wind gust of schmutz that messed up the finish in spots. Then, I managed to install the elevator control horn backwards even after following the old ‘measure twice and install once’ rule. I ended up needing to repair the elevator area and, unfortunately, that was AFTER the final finish was already applied to the plane. Then the cockpit became a rabbit warren of one goof after another that needed to be dealt with. In the end though, I ended up adding some additional unplanned cockpit details to cover up mistakes which added some nice interest in their own right.

This past week, with the build virtually completed, I came upon another 1/2A Control Line plane, a Stinson Reliant, in another collection I acquired. I see another build in my future…but that’s a story for a future FlyBoyz post!

For now, I’ve prepared the following brief video which documents the build of Roger Ramjet and his Racer that I have described above. Enjoy the video. And fly Control Line!