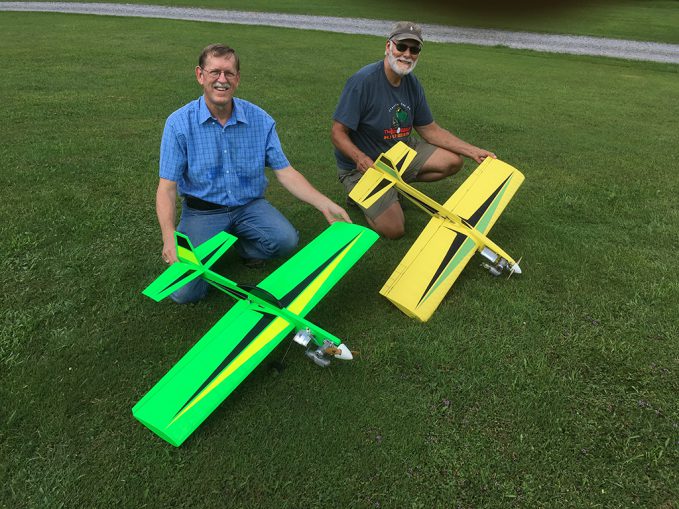 Late last year, I posted a video in which I talked about building a control line SIG Twister. The intention was to build this as a replacement for my crash hardened Ringmaster, give me a more advanced stunt plane to hopefully advance my flying skills, and to build it in conjunction with a similar plane that my control line flying buddy, Steve Dwyer, was building…a ‘Companion Build’ as Steve likes to term it. And we decided that we’d build the Twisters as ‘twins’ with similar but opposite color schemes. We also decided to both put new, matching O.S. Max FP 40 engines in our planes.

In early March, I published a post detailing some of the build differences and the current status of our two respective builds. The post Twin Twisters focused mostly on Steve’s build as I was just getting started on mine at that time. It took me until the start of summer to finish my Twister and finally, on July 16, my plane made its maiden flight. Since then, I’ve had a few flying sessions with it which were focused on ‘tuning’ it. A couple weeks ago, I reached the point where my Twister was tuned and flying good enough that I was able to focus on actually flying it for enjoyment and to advance my flying skills.

And then, on Sunday, August 12, Steve and I finally got our two Twisters together! The opposing color schemes that we selected look great and have generated several positive comments. You can judge for yourself with the photos included with this post. We each flew our own planes that day. At a future flying session, we plan to ‘try out’ each other’s plane in order to compare and contrast the flight characteristics of each other’s build approach.

Right now, our immediate intention is to fly the Twisters together in a control line flight demonstration this coming Sunday (September 2) at the annual STARS Airshow. Steve will be flying a free form aerobatic flight routine while I fly a simplified pattern meant to demonstrate some of the basic control line aerobatic maneuvers. So, come on out to the Airshow, check out our planes, and watch us fly the Twin Twisters!

In the meantime, enjoy these photos of our Twin Twisters.