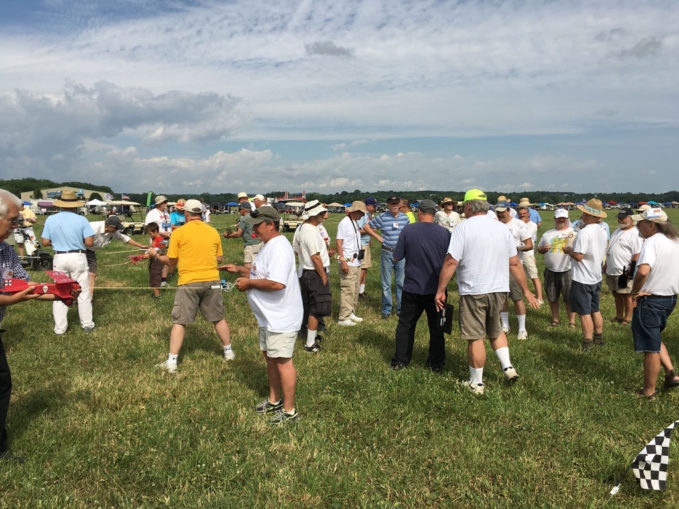 Yesterday, a week after being in Geneseo, NY for the National Warplane Museum Airshow, I found the wind in Geneseo to still be a bit on the ‘breezy’ side. However, that did not stop the intrepid aviators of the Flying Aces Club (FAC) from conducting their biannual Nationals competition. Every other year, the members of the FAC toss their fragile stick and tissue, rubber band powered, free flight model airplanes into the air for several days of their Nationals flight competitions. And a bit of a ‘breeze’ was not about to stop them from doing so on the day of my visit.

I had brought along my Karkhov and Junior Commercial planes (both written about previously here in FlyBoyz) but decided that the wind was too much for me to be tossing around as yet un-trimmed airplanes. So instead, I enjoyed watching and talking with the other flyers. I also had some nice conversations with Mark Freeland of Retro RC and Dave Niedzielski of Easy Built Models. Mark invited me to sit and chat with him in his vendor tent and treated me as if I was a long lost friend. Dave complimented me on my construction of the Junior Commercial, a kit I had previously purchased from him, and offered some suggestions in response to a couple questions I had about the plane. Both of these guys were a pleasure to talk with and really defined what customer relations is all about! I was also fortunate to get to meet Tom Hallman. Tom is a model builder who fits my definition of a real craftsman. I am in awe of the model planes that he builds and have featured several of his building and flying videos here in FlyBoyz. While I was at the Nationals yesterday, I was able to witness and film the WWI Mass Launch competition. During the filming of this event, I got some video of Tom and one of his planes. The Mass Launch events start with 25+ competitors (pilots) and three flights are flown. The 12 planes with the longest duration flights in the first launch compete in a second launch. The 7 planes with the longest duration flights in the second launch then compete in a third and final launch after which the 5 longest flights comprise the winners list. Tom and his plane flew awesome flights in both the first and second mass launches. But a stall during the third mass launch caused Tom to fall out of the competition. This video is typical of the action that you will find at any FAC event. Enjoy!.

If, after watching this video, you think you may have an interest in attending an FAC event, such as the one shown below, you can find a complete listing of upcoming events here at the FAC website: Flying Aces Club. Check them out!