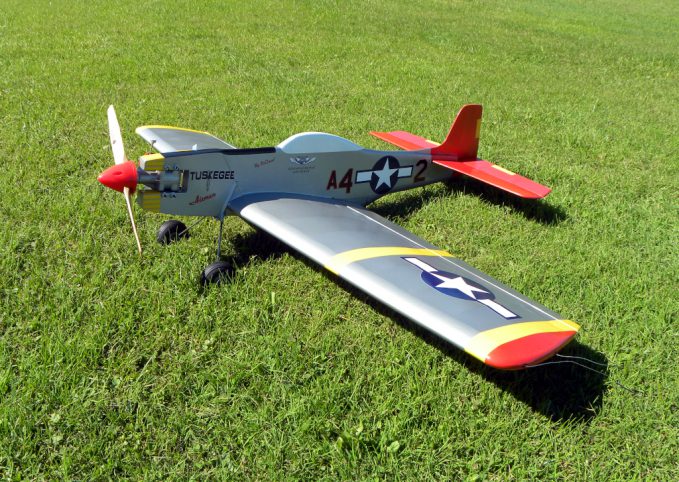 A few months ago, I published a post (A ‘Good’ Mustang) about a Sterling P-51 Mustang control line model that I had been entrusted with the care of. As I explained in that post, this is a special model plane in that it had been built by William ‘Bill’ Good who was one of the forefathers of Radio Control for model airplanes. Since that post was published, I have completed the restoration of the plane and the glow engine now being used to power it. The plane made its’ debut and maiden flights this past Saturday during our local edition of the 2021 Ringmaster Fly-A-Thon.

The restoration of the plane went well, although, as usual, I got into a bit of a time crunch near the end. The plane itself was still in good structural condition requiring only a new rudder to be built and a couple of the cloth aileron hinges to be replaced. During the restoration, I realized that the wing had originally been installed at a ‘wonky’ angle in relation to the fuselage. Instead of being perpendicular to the fuselage, it was angled by several degrees. I decided to leave it alone and hoped that the angle would not impact the flight characteristics of the plane.

The decision had been made when I was given the plane to redo it in the Tuskgee Airmen ‘Red Tailed’ Devils paint scheme. This involved no less than 4 colors of dope but it went well. Callie Graphics supplied me with decals scaled to the size of the plane. Despite the wind blown crap that ended up in the final clear coat of dope, in addition to the blushing that resulted from the 90%+ humidity during my final paint session, I was pretty satisfied with the final paint job.

During the (2) maiden flight(s), the McCoy .35 Redhead engine started up and ran with no issues at all. But more importantly, the wonky wing seemed to have no impact to the straight and level flights of the plane. In fact, the plane seemed to handle very well! It was a gentle flyer and was responsive to the controls. I realized after the flights that, in the rush to complete it, I had totally forgotten to balance the plane. When I did that the following day, I found that it balanced almost exactly on the CG. I added a 1/4 ounce of weight to the tail to tweak the balance point.

I really enjoy restoring these old birds and returning them to a flyable condition. However, given the provenance of this particular model, I don’t plan to fly it except maybe during a rare public event of some type (Brodaks??). Mostly, it will serve duty as a static display model to show what one of the forefathers of our hobby flew and how an old model can be restored to a presentable condition.

With this latest restoration completed and in the ‘hanger’, I will now turn my attention back to the Martin B-10 Bomber build. But first, I’m taking a few days break from plane construction and I’m building a quick little Craftsman Structure Kit for future installation on my HO model railroad.

I’ve prepared the following video which documents the restoration of the P-51 as well as showing the 2 (brief) maiden flights of the model. Enjoy the video. And fly Control Line!