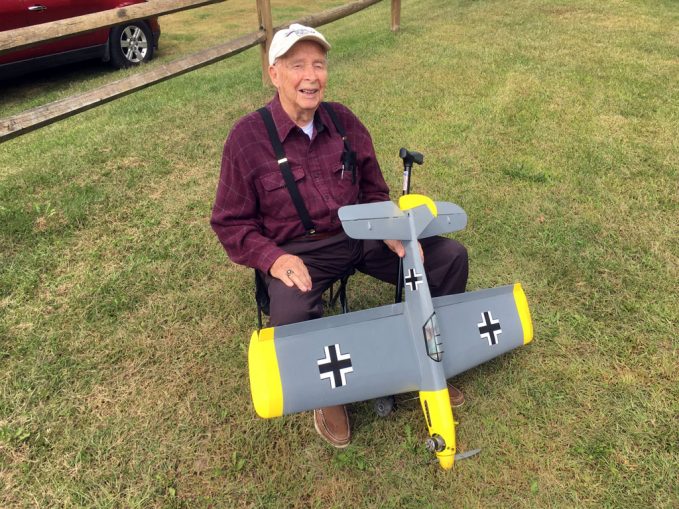 Last year, my control line flying buddy, Steve Dwyer, reconnected after more than 50 years with his childhood model plane building and flying mentor, Bob Craft. Since that meeting, Steve has been wanting to go back once again to reconnect with Bob, only this time, he wanted to bring along the ME109 that he and Bob had build together more than 50 years ago. He wanted to try and coax Bob into doing some ‘old-time’ control line flying with himself. Oh, and Steve also wanted me to come along so that I could meet Bob!

So, last Saturday, Steve and I made the drive back to Rensselaer, NY and had a totally enjoyable day with Bob. Bob was reluctant to fly, but did enjoy over an hour of being entertained by Steve and myself as we flew several of our current planes. And the flying session was capped off by a successful flight of the ME109 that meant so much to both Steve and Bob. Below is Steve’s Guest Post of our visit with Bob along with photos taken during the day. This post is then capped off with a video of the successful flight Steve had of a 50++ year old plane that is very special to two great old friends.

It has been my goal for some time to travel back to my old homestead and visit a friend that was a big part of my early years in learning control line model airplane building and flying. To put this in better perspective my objective was to attempt to get my friend Bob Craft out flying again after nearly 60 years since we built and flew models together and with his help reacquaint myself to our early experiences in the area and where I grew up and flew planes.

My interest in control line modeling took off for me at about 12 years of age. At that time, I discovered in the neighborhood a man in his early 30’s who had served in the Second World War and built control line model planes. Today, Bob is 92 and given his age he still has a remarkable memory of the planes we built and where we flew models including much of the detail that goes with building and flying.

After making arrangements for the visit, checking the weather and winds in his area in the eastern part of New York near Albany, we ventured out. I invited my flying buddy, Mike O’Neill, to go with me. I wanted him to meet Bob. Mike and I brought along several models to fly with Bob at a nearby park almost across the street from where Bob now lives in Schodak, NY. On the way, Mike and I traveled thru the old neighborhood in Rensselaer where I pointed out Bob’s and my parent’s houses. I showed Mike Bob’s old garage where we broke in new engines and where I had smelled for the first time the scent of Castor Oil.

After picking up Bob, we traveled to the old flying field in East Greenbush, south of Albany, where I flew my first model, a Guillows Basic Trainer II with a Fox.15. Visiting the field was a trip down memory lane, Bob pointed out the actual flying location and cleared up confusion for me as to where the grass field was. My difficulty looking at area maps was the orientation of the field which was active in the 1940’s. There is a school now located on the model field and homes have been built where the early airport landing field was. I can still recall standing on the model field and watching yellow J3 Cubs on final for the field across the road to the South. Getting this cleared up was important since I had driven thru the area in the past. Bob clearly knew the area. In 1960 the flying club was called the Model Aires?? and Bob was president, they had over 50 members.

Of particular interest to Bob was my restored ME109. I’d told him I would bring it but may not fly it due to its fragile condition. It had been repaired once since I restored it two years earlier and I felt it’s flying qualities had been compromised. Bob really wanted to see it fly so I flew it and was surprised how well it flew. I stunted thru several loops and flew inverted with good results.

The ME109 was scratch built from plans designed by Frank Baker originally published in Model Airplane News in Nov. 1956. Bob had built the same plane previously which was destroyed in a mid-air collision with another ME109 built by another club member. Bob was fond of the ME109 and asked me if I’d like to build a companion model with him. This was about 1960. We did build the two ships together and I was pleased with the results, I learned a good deal about model building working alongside Bob in his basement workshop.

The trip was totally enjoyable for me, we had lunch and with the recommendation of Bob’s daughter, Sharon, we ate at a nearby restaurant that was attached to an antique car museum. What a day it was reconnecting with my old friend after so many years, spending time together was like reliving the drives to the flying field in his old ‘57 Mercury. I’m going to order the plans for the ME109 and scratch build it once again, Bob strongly recommended it as he felt it was one of his best flying models. I asked Bob what he missed most about control line modeling and said it was the building. He said he enjoyed the building aspect which was so evident with the beautiful semi scale models he built. Hopefully, I can make another trip to see Bob in the Spring and possibly bring along the new ME109. I wasn’t sure why Bob was not up for trying flying after 50 years. He probably didn’t want to show me and Mike up!