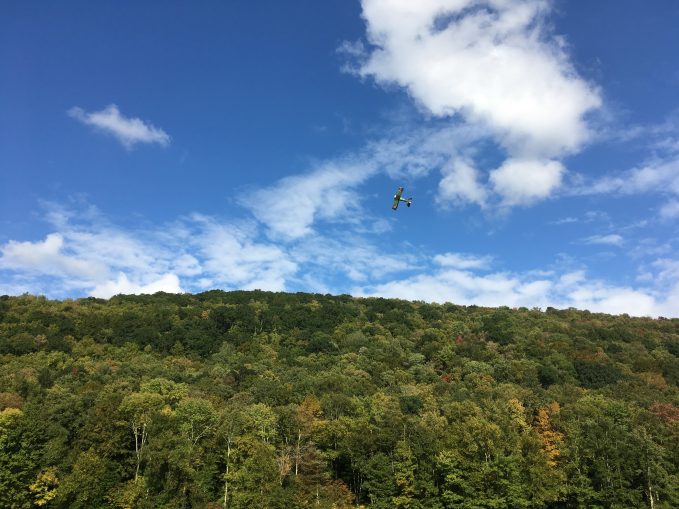 If you know me or have been reading more than a few of these FlyBoyz posts, you may know that I’m not real big into Radio Control (R/C) flight or electric engine powered models. And you may also know that I have a bit of a distain for ‘foamy’ model planes. I much prefer the (built up) balsa variety. So why would I attend an electric only, R/C event that is heavy on the foam variety of model planes? Good question! I’ve heard about the NEAT (Northeast Electric Aircraft Technology) Fair for a couple years now. It sounded like a pretty big event and that got my curiosity up…I kind of wondered what it was all about. I also decided to keep an open mind and see what this particular branch of the hobby was all about and what it had to offer someone. Finally, with the Fair being located about a 2.5 hour drive away from me, I thought that my attendance might make for a good excuse for missing day of work! So, this past Friday, I did just that and headed off to NEAT 2017.

My first impression of the Fair was its’ location. The Fair is held in the southwest foothills of the Catskill Mountains at a large open campgrounds nestled alongside the East Branch of the Delaware River. The drive to and from the Fair was worth the trip alone as the road wound among the foothills with the river on one side and the valleys tinged with color as the trees were starting to display the first of their fall colors. This was certainly pretty country for any sort of event!

My next impression was of the camping. The Fair extends over 4 days and a lot of the people in attendance were camping at the site over the 4 day run of the fair. When I arrived at 10:00 AM, the entire area had the atmosphere of campers just getting over their breakfasts and starting about their days flying activities. It was definitely a laid back, casual atmosphere.

I started out my visit by touring the entire length of the flight line in order to get the ‘lay of the land’. This proved to be no mere walk as it took more than a few minutes to walk from one end of the flight line of pilot and vendor tents to the other. There certainly were more than a few folks in attendance. After walking the line, I caught up with Phil Morgan who is a member of the STARS Club of which I am a member. Phil and I had arranged to meet at the Fair and the hope was that he and I would get to fly my new Sinbad electric powered glider. Unfortunately, the glider was not ready (a story for another FlyBoyz post!) so I contented myself with being an observer for the day with Phil acting as my gracious host. Even as an observer, there was plenty to keep one busy as there were organized flying activities that extended throughout the day. These activities were interspersed with plenty of blocks of time for ‘open flying’ by pilots. There was something in the air to watch during the entire duration of my visit. There were also several vendors in attendance and I even managed to spend a few dollars with some of them over the course of the day.

For me, the day ended up being mostly about the people. As I mentioned, Phil, along with his friend Don Raab, played host to me all day. During the course of the day, I ended up meeting up with some other members of the STARS as well as some guys from the Oneida Lake Flyers Radio Control Aircraft Club which is another Syracuse area based club. I also met up with, and had some nice conversation with, several members of the AMA executive staff who were in attendance at the Fair.

The last scheduled event of the day concluded about 5:00 PM and I headed for home at that point. During the drive home, I reflected on the days activities. I noted that in a lot of cases as I had been wandering the vendor tents, I had no idea what I was looking at. To a large extent, the technology of this hobby has passed me by. But that was offset by a plane in one of the vendor tents that I put on my ‘buy’ list. I found a beautiful Howard DGA-3 “Pete” with a 40″ wingspan that was a built up balsa kit that would lend itself to a glow powered control line conversion! My final reflection was about myself. I tend to be a bit of a project/task driven introvert and am not much for spending a day ‘socializing’. However, I found that the day spent doing just that at the Fair was kind of enjoyable and was something different for me. In the final analysis, I found the 2017 version of the NEAT Fair to be…pretty Neat!

I have gathered up some of the photos and videos that I took at the Fair and put them together into a video synopsis of my day. I hope you enjoy this overview of my day at the Neat Fair!

P.S. At the end of my video, you will see where I filmed the Mass Warbird Launch. This was a great event with 68 planes in the air at the same time. Approximately 1/3 of them did not survive the ensuing carnage! The only problem was that my camera ran out of memory and all I got on film was the launch. On my video, I give a link to a Facebook post by Kevin Jones, a member of the Oneida Lake Flyers club. Kevin was standing near me during this event and managed to film the carnage. He has graciously allowed me to include a separate link to his video here in this post. You can view it below. Thanks Kevin!