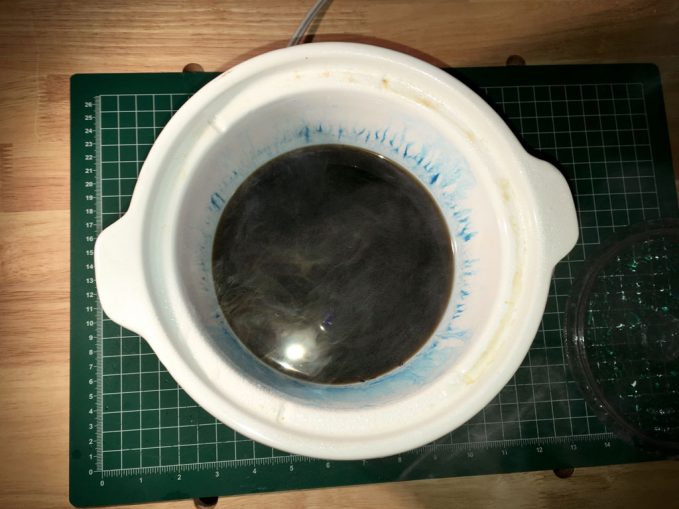 Last year, I purchased a used O.S. 25 LA control line engine for use with my training planes. Over the past 2 flying seasons, I’ve had this engine on 3 different planes, run a couple gallons of glow fuel through it, and buried it in the ground on probably a half dozen occasions. Through it all, this engine has just run and run with easy starting and consistent power. Buying it has to have been the best 20 bucks I’ve spent on my aviation hobby to date.

With the crash of my Ringmaster a couple months ago (yet another incident of burying the engine in the ground), I decided that it was time to do more than just brush the caked on dirt and grass off the engine again as it was looking a bit ratty with signs of corrosion and glow fuel residue built up on it. I decided to give it a ‘bath’. When I got back into the hobby a few years ago, I learned about using antifreeze to clean old seized up engines. I’ve tried the technique a few times with some old COX engines and I was very pleased with the results. It was time to give the O.S. the same treatment. The treatment is very simple; basically you break down the engine as much as possible, then put the parts into a small crock pot and cover them with standard antifreeze (the lime yellow variety). You then turn the crock pot on high and let everything ‘cook’ overnight. I do try to ‘stir’ the pot a couple times while it is cooking. I don’t know if this actually accomplishes anything but it makes me feel like I’m contributing to the process. One caveat at this point: do NOT put any plastic parts in with the ‘stew’ as the antifreeze will effectively destroy the plastic.

The next day, turn the crock pot off, let things cool down a bit, then fish out the engine parts. I then clean all the antifreeze and residue off the individual parts. Windex or Fantastic/049 does well for this. I then reassemble the engine and feed in a few drops of ‘After Run’ engine oil to lubricate everything. After turning the engine over a few times, it feels like a brand new engine.

Once I dissembled the O.S. 25, I was shocked by the accumulated build-up of engine gunk, carbon, and who knows what else that there was on the internal engine components. In particular, the top of the piston and the inside of the cylinder glow head had an amazing amount of build up on them. The piston head, which is supposed to be flat and smooth, was anything but. It literally had build-ups on it that looked like little mountains. And the concave cylinder head (where the glow plug does its thing) was mostly filled with black (carbon?) build-up that mostly filled the concave area. The crankshaft was also nasty with built up gunk and what looked to be corrosion. I’m not sure how the engine functioned with all these build-ups. The exterior of the muffler and the engine cooling fins also had what looked to be corrosion built up on them. I’m not sure it was actually corrosion, it may have been just cooked on glow fuel, but in any event, they all looked nasty. Engine stripped down before cooking The antifreeze process did a wonderful job removing all of the built up gunk from the O.S. 25. After cleaning up the parts, everything was once again smooth and clean. In particular, the piston head was once again flat and smooth and the cylinder head was once again concave. Now that the engine is reassembled, it turns over very smoothly and with great compression. The only issue I had with the entire process was to the outside of the engine itself. This engine was factory painted with a blue paint on it. The cooking process ended up removing some of that paint. However, this is purely a cosmetic issue and will in no way affect the performance of the engine. Anti freeze (with parts) after cooking Engine stripped down after cooking Restored engine assembled and ready for installation on plane

Now that the engine was restored to a ‘like new’ condition, I proceeded on to the Ringmaster which had its outboard wing totally broken off during a training flight I had offered to a 12 year old first time flyer at my club field. I proceeded to fix the wing (a couple nights repair job) and then reattached the engine. The plane and engine are now 100% ready for the flying field. My only fear is that with all this attention having been spent on it, the engine will never run again! Ringmaster all repaired (again) and with ‘cooked’ engine installed

I’d highly recommend the crock pot/antifreeze cooking process to anyone who is trying to restore an old seized up or dirty engine, however, I do need to add the following warning: after having anti-freeze in it, do NOT use the crock pot ever again for cooking or serving food for human consumption as ingesting anti-freeze is lethal!