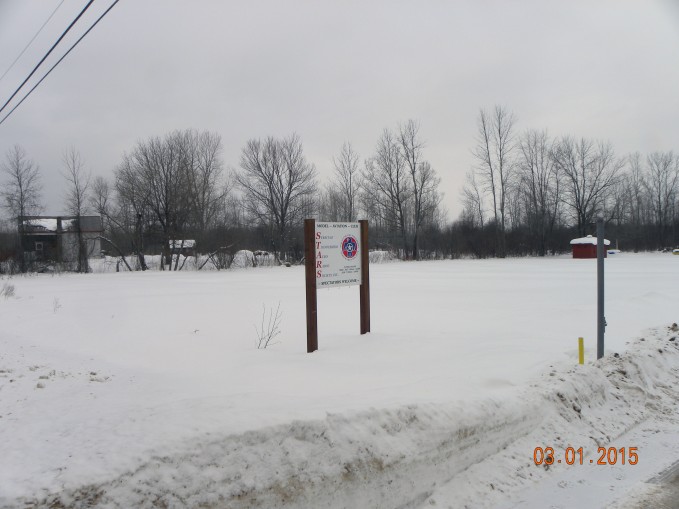 The snow packed residents of Central New York don’t despise winter (well, some of them don’t), we embrace it! And that is just what the Syracuse Thunderbirds Aero Radio Society (STARS) did today with their annual ‘Snow Fly‘ event. There was a lot of speculation leading up to the event as to whether or not access to the field would be available given the snow pack. However, a few hardy club members with snow plows and snow blowers rose to the task and cleared the driveway in to the clubhouse parking lot, and pathways to the clubhouse and flight line. The only variable left was the weather conditions at flight time. With an expected 4-6 inches of additional snow forecast, it was iffy as to if the event would go on. Fortunately, the snow held off until the end of the event and, at 31 degrees, the temperature was downright balmy. Ground winds seemed fairly mild, however, those who did make it airborne said that the winds higher up made their flights tricky but not impossible.

There was a good showing of flyers and members with several dozen in attendance. And everyone was treated to some great entertainment and flying. The hospitality of the STARS was again on display with warm accommodations in the clubhouse, plenty of food and drinks available, and lot’s of camaraderie. The entertainment high point was the attempts by a certain green Kadet Senior to first get airborne with an engine that was not properly leaned out and then to land with no floats which fell off in-flight!

At this point, I’ll let the following photos and videos speak for themselves! STARS – The view from the road. Hiking in from roadside parking with plane in hand and a happy smile in anticipation of winter flying. Besides the street, the parking lot was full. A balmy 31 degrees at flight time! 4 -6 more inches of snow was forecast for later on in the day. If it was not for the blue leading edges, this little bird would be invisible in the snow! Prepping the Kadet Senior for flight. Uh..oh! OK, who’s gonna walk out and recover that one?! If the skis don’t work, hand launching does! The heli’s had a much easier time with take off and landing then the fixed wing did. The club house is heated and did a good job warming up flyers and members. Plenty of benchwork is available for battery charging and radio tuning. The STARS club takes good care of everyone…plenty of pizza, donuts, soda, and hot coffee was available for all to enjoy.