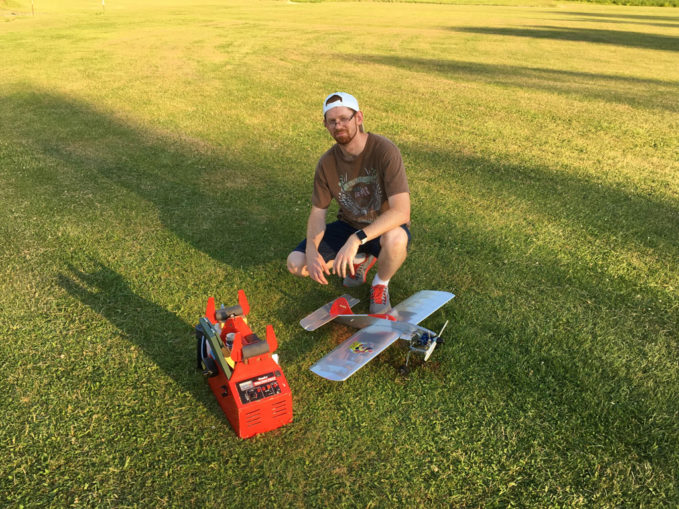 If you’ve been following along with my FlyBoyz posts, you know that over the past year I’ve been struggling with my mental block at flying my control line planes inverted. Last summer, I totaled my Mustang during an early inverted attempt (it is STILL in the hanger undergoing repairs!). And the Brodak Super Clown that I purchased to replace the Mustang has had more than a few encounters with Terra Firma as I’ve tried to go inverted.

I knew that for me to get this inverted thing done, the key was to get some concentrated solo time at the flying field with no audience or other distractions to break my focus. Over the past few weeks, I was able to get that solo time and I finally cracked the barrier! And once I cracked that barrier, a whole new world of flying has been opening up for me. Over the past 2 weeks, I have been able to get to the flying field after supper several times each week for a couple hours at a time. This has given me a period of concentrated flying where I could focus on my basic flying skills while building up my confidence level.

And the results are showing! Over the past week, I have had several occasions to fly in front of others and I have managed the inverted thing with no issues. I’ve also progressed to doing horizontal (lazy) 8’s with relative ease and have even thrown in a couple overhead 8’s. There was a big payoff this past Saturday when we held another flying session at Chuck Burtch’s Rabbit Lane Airport (see: Flying At Rabbit Lane Airport NY31). There were several members of the local EAA chapter in attendance at this flying session and all witnessed my new flying skills executed with no mishaps!

But the biggest payoff was on Father’s Day when I went to the flying field with my son FlyBoy Corey O’Neill (pictured above). Not only did he witness my new flying skills, but he even filmed them so that I could show all of you what I have accomplished! To that end, I’ve included a brief video with this post where I demonstrate some of my current flying skills. Corey did video the entire 8 minute flight (as he notes with some commentary during one point of the filming!) but I won’t subject you to the entire 8 minutes here! My techniques are no where near competition stunt pattern levels, but I’m happy to be doing what I’m doing at this point!

Of course, I did take the opportunity to let Corey fly the Super Clown and work on his own control line skills. He has had a couple ‘straight and level’ introductory flights over the past couple years so it was time to work him up the stunt pattern. After one flight of ‘straight and level’ to get the feel of the Clown, he progressed to wingovers during the second flight. And before the end of that second flight, he even managed to pull off two loops!! And I’m here to say that he made good landings at the end of each flight. (I didn’t get any video of his flying as I was out in the center of the circle with him coaching him through each flight.)

It was a good Father’s Day of flying day for both of us! Enjoy the video!

P.S. Corey is a software engineer by trade and has published a very cool mobile Android app. It is called Tempo Player and for those who work out, this app is worth checking out! To quote from the Google Play Store where you can download the app:

Tempo Player is the perfect complement to your already existing favorite fitness apps. Music is a must have companion to exercise, but did you know that the wrong music can subconsciously slow you down and tire you out? If only there were a way to steady the beat to match your pace…

Tempo Player is not a typical music player, and is not intended to be. It exists specifically to solve the problem of synchronizing the pace of an activity, such as jogging, with the beat of your music. Tempo Player finds its niche by using your music on your device to perform its function for free and without a subscription or account.

You can check out and download Tempo Player on the Google Play Store by clicking on this link: Tempo Player