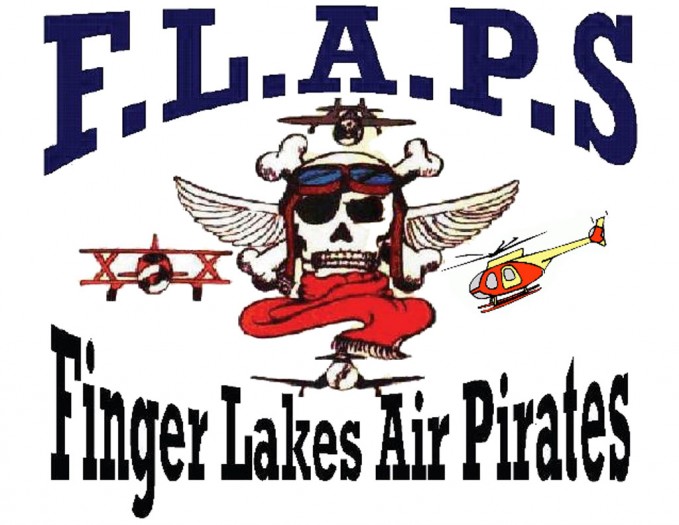 Seneca Falls, New York is recognized as the setting that Frank Capra’s classic movie ‘It’s a Wonderful Life‘ was modeled after. It is also the home of the Finger Lakes Air Pirates (FLAPS) R/C Flying Club. Today, the FLAPS held their annual Swap Meet and Auction so my control line flying buddy, FlyBoy Steve Dwyer, and I ventured out to Seneca Falls to check out the action and meet up with fellow control line flyer Chuck Smith.

Chuck is a member of the Rochester RAMS R/C club who we’ve been communicating with recently but had yet to meet in person. The FLAPS Swap Meet was a perfect opportunity for a first meeting and it’s location half way between Syracuse and Rochester helped to foster the meet up. Steve was also anxious to get his hands on the OS .40 engine that Chuck had secured for Steve to use on the new Primary Force control line plane that he is building. We met Chuck and the engine swap was consummated! Later, the three of us went to lunch in downtown Seneca Falls…it may have even been in the old bar that George Bailey visited in the movie!

What I find particularly enjoyable about events such as this, is when I run across someone whom I’ve never met before but who is an active follower of FlyBoyz. Such was the case with Ed Britton. I was chatting with him while looking at some of the custom vinyl products he produces and decided to give him one of my FlyBoyz cards. At that point, Ed lit up and said “So you’re the FlyBoyz guy!”. Uh, yep, that’s me! He said that he really enjoys the blog and, based on the flight antics of Steve and myself, has even been inclined to give control line flying a go! I find it really inspiring to think that my random musings can inspire others to enjoy aspects of aviation that they may not have otherwise considered. I told Ed that he had earned himself a place in the next blog post and he can be seen in one of the below photos. Great meeting you, Ed!

In all honesty, I was pleasantly surprised by the size of and attendance at the FLAPS Swap Meet. And even though the event was radio control oriented, Steve and I did find a few nuggets that lent themselves to our particular brand of control line building and flying so we did not come home empty handed. But more importantly, both Steve and I met up with several folks that we knew and we made several new acquaintances in the process…and that alone made the trip worth while. I look forward to attending again next year!