Home Mustang vs. ME109: Adolf Plots His Revenge

Mustang vs. ME109: Adolf Plots His Revenge 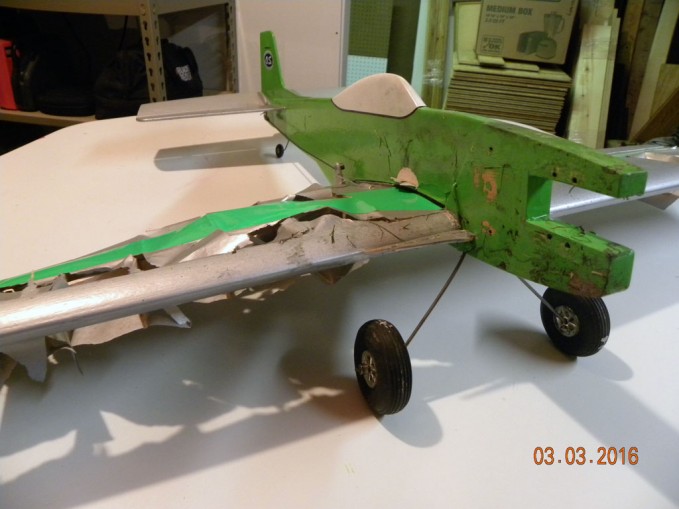 (Note: In order to properly put this post into context, and to make any sense what-so-ever out of it, you may first want to review the following two previous FlyBoyz posts:  Mustang vs. ME109: A Tall Tale??  followed by:  FlyBoyz Guest Post: Control Line Flying Update 07)

After many months of walking past my damaged Mustang, I was finally able to spend a bit of time surveying the damage that it sustained during it’s last flight last summer. At that time, my first attempt at inverted flight with it had ended in disaster. I picked up the pieces and put them in my workshop with the intention of doing a quick repair. That repair never happened and I’ve been walking past it in the workshop for many months now. I finally determined that with the new flying season quickly approaching, it was time to get after that repair. And it was just about that same time that I received the following communication from squadron headquarters:

‘The ME 109 repairs are almost complete and will be back on line and in the air war very soon. Sources have it Adolf’s new mechanic has created a stronger reinforced airframe and installed a modified more powerful super charged Daimler Benz under the hood; pesky, tired and worn out P-51’s be aware. Adolf and his old wingman, Gunther, have been spotted meeting at their command squadron bier hall. A fraulein they were hitting on (see photo attached) has leaked they are planning a strategy to return to seek out the bogus chicken tailed pilot that caught the ME on the ground and shot up the shitter. More to come on this.

As can be seen from the below photos, I had not even cleaned the fuel and grass off the plane since that last flight. So, I proceeded to remove the silkspan from the wing in order to survey the extent of the damage. And I found a good news/bad news situation. The left wing is virtually intact but the same cannot be said for the right wing. The damage to the ribs, center spar, flaps, wingtip, and leading/trailing edges all speak for themselves. That wing needs virtually an entire rebuild.

The other damaged area is at the wing roots where they attach to the fuselage. The fuselage is cracked in this area and will need a reinforcing doubler added for strength. After the attempt at an inverted landing failed, the allies had put their best mechanics on the Mustang, who then determined that the plane could be restored. Their plans included reinforcing the fuselage at the wing roots and doing a major rebuild of the right wing. Plans were also put into motion to re-cover the entire plane with a new, secret allied material called ‘Monokote’, which would offer the plane better protection from the noxious chemicals spewing from the German mist haus’s. Upon receipt of the intelligence communique from Jag weeks, the allied command saw an opportunity to gather further information on Adolf’s plans for revenge upon the Mustang. Knowing of his weakness for both beer and Fräulein’s, the allies decided to play to both weaknesses. They immediately dispatched their top spy to Adolf’s favorite Bier Hall with instructions to gather as much information as possible. Allied command knew that, compared to the typical German bier hall frau’s, their spy would be irresistible to a leach such as Adolf.