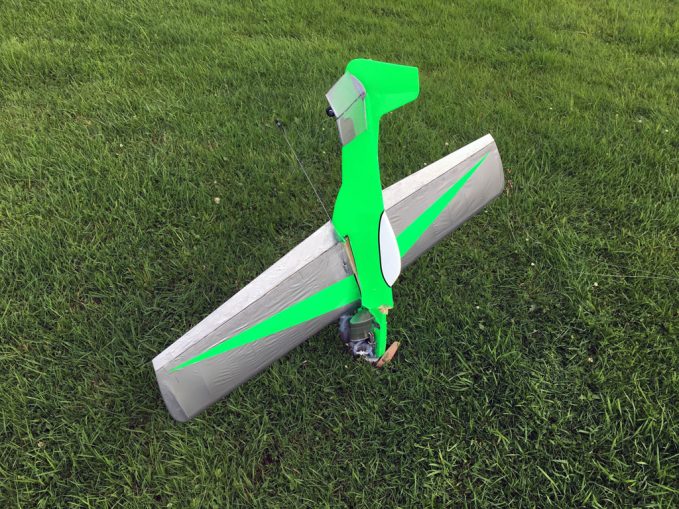 (Note: In order to properly put this post into context, and to make any sense what-so-ever out of it, you may first want to review the following three previous FlyBoyz posts:  Mustang vs. ME109: A Tall Tale??  followed by:  FlyBoyz Guest Post: Control Line Flying Update 07 and finally by: Mustang vs. ME109: Adolf Plots His Revenge)

Allied Intelligence had reported that Adolf and his feared ME-109 had been shot down and were no longer a threat to the Mustang. Further reports indicated that Adolf’s wingman, Gunther, was also no longer an issue. He was grounded permanently after wrecking his third BF109 on landing due to ‘eyesight issues’. With the scourges of the German Luftwaffe no longer an issue, the Mustang was anxious to engage once again it it’s favorite activity, strafing German mist haus’s.

Field conditions had continued to be abysmal with wind and large pools of water due to incessant rains delaying any flight attempts. Finally, on this night, the air was dead calm, the blinding sun was shielded from the eyes by light clouds, and field conditions, while still very soggy, at least permitted takeoffs. Landings would be tricky due to the standing water but were doable.

The Mustang took to the air and relished the late evening flight conditions. Wingovers, inside loops, inverted flight, and lazy eights were all performed with increasing precision as the pilot anticipated performing yet another new stunt…an outside loop performed from the inverted attitude. Once successfully performed, the outside loop would afford the Mustang yet another flight attitude to approach the mist haus from.

The Mustang’s engine had been performing flawlessly over the past many training flights and was again performing without issue as it entered one last lazy eight before attempting the outside loop. Suddenly, at the very top of the inside loop entry to the lazy eight maneuver, Gunther and his dreaded BF109 erupted from the clouds and fired off a quick burst at the Mustang. The Allied Intelligence report about Gunther had apparently been ‘Fake’ intelligence, for not only was Gunther still flying, his eyesight was still good enough for one of his tracer rounds to find its way to the Mustang’s engine! The engine immediately stopped running and the Mustang rolled over from the very top of the inside loop into a straight down dive. Despite all attempts by the pilot to regain control of the Mustang, it was a lost cause. The Mustang came straight in and buried itself into the soggy bog that was serving as it’s flying field. Gunther did a low flyby to confirm his kill. With the Mustang’s fuselage completely broken in two places, he could clearly see that the Mustang would never fly again. It had already been repaired several times, but this last crash proved to be too much for the Mustang.

A salvage crew was sent out to recover the plane and any usable parts from the wreckage. Despite the momentary loss of power due to the tracer round, the engine was deemed to still be functional. Headquarters has determined that the engine will be re-mounted in the feared ‘Ringmaster’ which has recently been experiencing engine performance issues with its older engine. A new engine in the Ringmaster will make it a contender for learning the new Outside Loop maneuver. With the loss of the Mustang, a chapter has been closed in the annals of this voyage of Re-Discovery. It served to recreate one of the planes from the pilot’s inventory of 40 years ago and it taught the pilot how to fly inverted and how to perform lazy eights, two maneuvers which now seem natural and effortless to a pilot who once wondered if he would ever master them.

With the engine from the Mustang re-purposed into the Ringmaster, the Allied pilot will look to further increase his flying skills and once again be able to take on the dreaded Gunther and his 109!