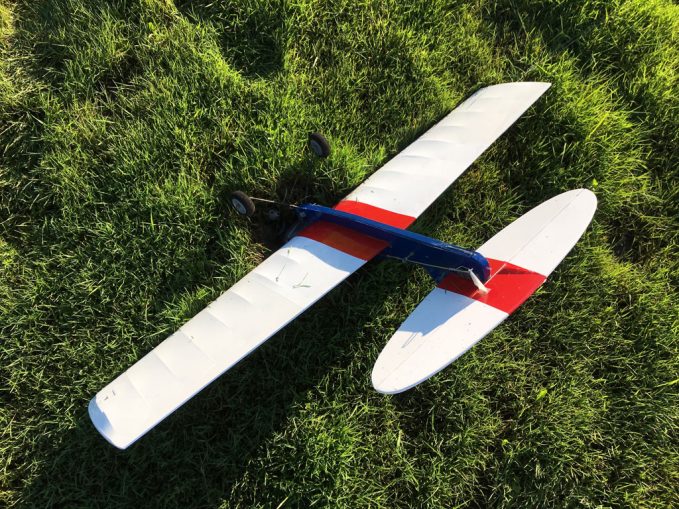 Returning to the Aufhänger and raising their steins to the sky, the yellow nose pilots wasted no time celebrating the end of the pesky green skinned P-51. It was also the general conclusion, based on rumor, that the American pilot was playing on the idea of getting an aged behind the hanger Ringmaster model airborne. No problem was the consensus; not to worry, any pilot flying a “Ringmaster” against the Luftwaffe and the coveted ME 109 must surely be a clown at heart.

And so was the feeling among the Germans upon hearing of the demise of the Mustang. But the Allied pilot had other plans. He was to master the outside loop, flying it from the inverted position, and then challenge Gunther with his rebuilt Ringmaster!

The Allied mechanics had done a masterful job retrofitting the new OS Max .25 LA from the wrecked Mustang into the Ringmaster. All that was needed were the proper flight conditions to test out the new engine in the plane. Several days of torrential rains had once again rendered the flight field into a lake. Finally, the sun came out and the field conditions started to improve. It was late in the day on the American 4th of July holiday when field conditions finally allowed for flying. The American pilot had spent the holiday working on restorations to flight headquarters but was anxious to get into the air. As dusk approached, the air was once again calm and the low cloud cover that had previously worked to Gunther’s advantage was gone. In fact, the skies were absolutely cloudless with the sun setting low on the horizon as the day was ending.

The American pilot took the Ringmaster up and was duly impressed by the increased performance offered by the new engine. Line tension was great, speed was aggressive and consistent, and the planes performance through aerobatic maneuvers was impressive! The pilot took the plane through two flights of wingovers, inside loops, inverted flight, and lazy eights. The Ringmaster had never performed better.

The pilot was anxious to make one more flight and attempt the outside loop before the sun set over the horizon. A quick landing for another tank of fuel and the Ringmaster was airborne once again for its third flight of the night. After some quick inverted flights, the pilot put the Ringmaster over onto its back once more for the setup to the outside loop. He gained some altitude and then began his entry into the loop. And then it was Deja Vu all over again! Gunther!! Only this time, Gunther had flown low over the treetops and approached the field directly out of the setting sun. He fired off a quick burst but his poor eyesight caused the rounds to miss the Ringmaster. However, the glare of a tracer passing right in front of the cockpit caused the American pilot momentary blindness and he lost his flight orientation. Not knowing where his controls were set, the pilot drove the plane directly into the flying field at a 45 degree angle – inverted! But, instead of the usual noise associated with a crash of this nature, a giant sucking sound was heard as the Ringmaster buried its nose into the soggy bog that was the airfield. There was momentary quiet on the field as the pilot crawled out from under the imbedded plane with nothing more than his ego bruised. And then the quiet was shattered by the noise of an oncoming engine. As the pilot looked up, he saw Gunther wave with a peculiar finger in the air as he did one final flyby of the crash site before heading back to German territory. But the American pilot had more immediate things to worry about than the vulgar German. He hoped that the Ringmaster had faired the crash as well as he did.

Within a few minutes, the ground crew was at the scene of the crash, extracted the plane from the deep hole it had made in the bog, and managed to right the plane back onto its undercarriage. A quick inspection showed that the plane had indeed survived the landing almost as well as the pilot had. A new propeller would be needed along with a new engine backplate/needle valve assembly. And the engine and fuel system needed a through cleaning. Plane after extraction from bog. Plane right side up after extraction from bog. Nose/engine area after extraction from bog. New prop and engine backplate with needle valve are only casualties of crash.

With the plane and himself assured of survival, the pilot surveyed the flying field where all this action had happened. And he quickly realized that the field conditions which had caused such delays to his flight training had also contributed to saving himself and the Ringmaster to fly another day! Once back at flight operations headquarters, the pilot contacted squadron stores and had them order up the needed engine parts, along with a few spares. It would be a few days before the parts would be received and installed, but this would not be wasted time as it would give the pilot plenty of time to plot his revenge on the vile Gunther!