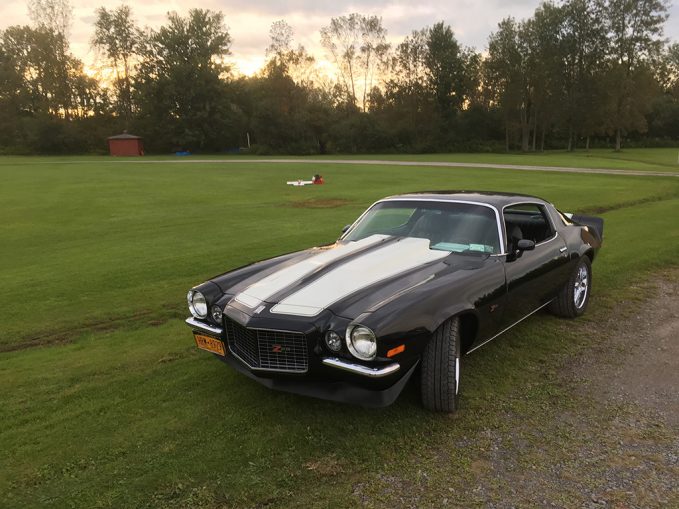 One of my intentions when purchasing this Z-28, was to keep it as my ‘forever car’ and hopefully pass it down to a future son. Over the course of the next 13 years, my wife and I drove this Z-28 for more than 130,000 miles all across America. But in 1986 our family situation forced us to do the unthinkable and I sold the car (or what was left of it). I promised myself that one day, I would replace my ‘forever car’ with another. And so the first item went on to my Bucket List.

Earlier this year, with our family and financial situation entering a new phase, and with my years ever advancing onward, I started to casually shop the internet for 1973 Camaro Z-28’s. The closest I came to an acceptable replacement was one located in Albuquerque, New Mexico, ironically located only a few miles from where we had lived for years before moving back to New York State in 2003. In any event, contacting the owner of that car proved to be an issue, so I continued my search.

Every July, the ‘Syracuse Nationals‘, one of the largest classic car shows on the east coast, is hosted here at the Syracuse State Fair grounds. I had never been to the Nationals before, but I decided to take a day and go ‘shopping’ this year. And in doing so, I found my replacement ‘forever car’!

The car was offered for sale by a gentleman, Frank, from Massena, New York who had done a complete restoration of the car. The car had been manufactured at the GM plant in Van Nuys, California and had spent it’s entire life in California, Texas, and Florida before being put into storage for 19 years. When Frank bought the car, it had absolutely no rust on it…a rarity in these northern snow belt climates. Frank did an awesome job with the restoration and added several ‘performance enhancements’  to the original package. The biggest of those enhancements was replacing the original 350 cubic inch engine with a Chevy ‘Big Block’ 402 putting out 420 horsepower. I have a list of the other drivetrain and suspension ‘enhancements’ that Frank added to the car. Needless to say, this Z-28 defines old time “Muscle Car”!

Here are a few photos that I took while at the Nationals: Original Chevy 350 cubic inch engine replaced with a Chevy 402 (big block) putting out 420 horsepower! And, yes, that is original factory black paint on the fender wells! A few days after the Nationals, my wife and I made the 3 hour drive to Massena to check out the car in greater detail. By the end of that visit, an offer for the car had been made and accepted. A week later, Frank trailered the car to my doorstep and the Z-28 was mine! And an item was checked off my Bucket List.

Here are a few photos taken during our Massena trip (my wife and Frank are in the background on a couple of them): Me and my Z-28 after the first test drive

So, I am sure that many of you are probably asking why in the heck is a post about an automobile being featured in what is supposed to be a FlyBoyz aviation blog?! Good question and I have 2 answers for that: Ringmaster onboard – proof that the Z-28 works as a plane carrier! And reason 2. This is my blog so I can write whatever I want to in it! LOL! (I know that seems a bit crass, but it is meant to be humorous!)

And so, 31 years after losing my beloved 1973 Z-28, I have regained my youth with another Z-28. Now the only question is…which one of my TWO sons will inherit it?!

(P.S. Phil, this is the ‘toy’ I mentioned to you last night. I’ll stop over with it sometime.)