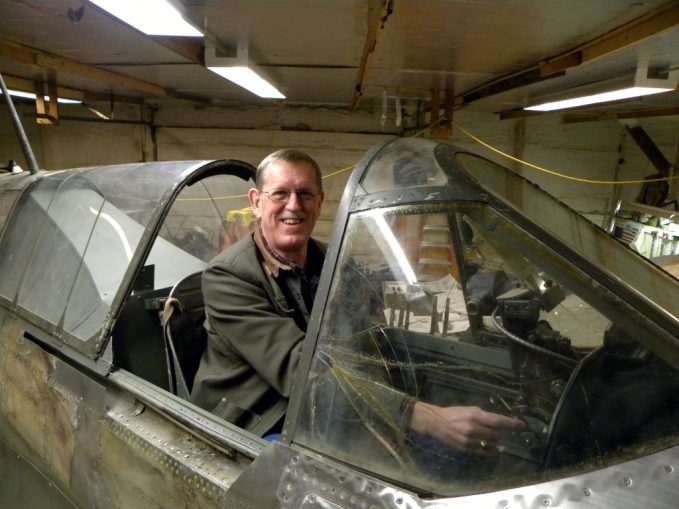 It’s hard to believe but it had been 4-1/2 years since my last visit, during the summer of 2016, to the P-40 Restoration Shop at the Glenn H. Curtiss Museum located in Hammondsport, New York. Life, and a certain pandemic, had gotten in the way of my catching up on the P-40 restoration progress. So with some free time on my hands during my retirement, the end of major Upstate New York winter snow storms in sight, and some COVID restrictions easing, I decided it was time to venture out and do a circumnavigation of the New York Finger Lakes and catch up on the happenings at a couple of aviation museums, specifically, the Glenn H. Curtiss Museum and the National Soaring Museum located in Elmira, New York. I’d never been to the soaring museum so I decided that after visiting the P-40, I’d couple visiting the two museums into one trip. This FlyBoyz post describes what I found in Hammondsport and my next post will present the National Soaring Museum.

The first thing I saw when approaching the Glenn H. Curtiss Museum was the new enhancements to the museum entrance. New hardscape and a very nice sign draws you into the museum driveway. But not to be outdone is the Curtiss C-46 Commando which is on display at the entrance! The plane has been re-dressed with a new paint job and sits proudly at the entrance in a way that ‘Commands’ one to stop and see what’s inside the museum!

Before I go any further, I want to say ‘Thank You‘ to Museum Director Ben Johnson who granted me access to the P-40 Restoration Shop. While the museum is open to the general public, the restoration shops are still not open to general viewing by the public. I was very honored to be granted this access by Ben.

When I arrived in the shop, I was greeted by Dick Siegrist who I had worked with during my work sessions on past visits and who had been alerted to my visit. Dick has been with this restoration since early on and has shown true dedication in working 2 days a week for years now on this plane. He has been involved in every aspect of the restoration and has become the resident ‘Expert’ on the P-40! And he’s become quite a good riveter over the years. We got a chuckle out of sharing stories of my showing him how to rivet years ago.

In addition to Dick, I was greeted by Jim Blaney who joined the restoration team several years ago after retiring from an aerospace career as a Master Aircraft Structural Mechanic. This touched a special place inside me as years ago, I was an Aircraft Structural Mechanic in the Marines. Jim and I could talk the same language! And it was very evident that Jim has brought an expert skill set to the job to help guide this restoration to a level of structural and mechanical excellence that it would not have otherwise achieved!

A bit later, I was introduced to the third member of the P-40 restoration team, Janet O’Connell. Janet was a wonderful cheerleader for this restoration as she showed me around the plane and the shop. Besides researching and ordering needed restoration parts, Janet has single-handedly transformed this shop into a work space that is organized and productive! One of my prior ‘issues’ when working on this plane was the inability to find parts and tools without spending way too much time looking for what you needed. Not anymore! Janet has organized and labeled the entire shop so that now work can progress unabated. The value of this to the restoration is incalucable!

The first thing that one now sees when entering the P-40 Restoration Shop is a P-40 airplane!! Instead of a collection of parts and major sub-assemblies strewn around the shop, one is now greeted by an actual airplane! This really brought home to me the amount of work that has been accomplished on this restoration since my last visit.

The wing and tail surfaces have been completed and attached to the fuselage as have the wing fillets. The fuselage itself is now one completely enclosed structure. The engine has been installed and the propeller assembly is nearing completion. The cockpit is now a functional compartment with working instrumentation for all the operational systems. And most of the major operating systems are installed, connected, and functioning.

While major progress has been made, there is still a lot of work to be done to smaller sub-systems and finishing details. And the plane still needs to be painted. Once the plane itself is completed, the P-40 Restoration Shop will be converted into a museum display room for the P-40. So while there is still a long way to go on this restoration, the end is in sight. I asked Dick if he was ready to make any predictions on a completion date. He said ‘October…but I still don’t know what year!”.

One final P-40 tidbit has been added to the museum since my last visit. Artifacts from the plane are now available in the Museum Gift Shop. If you visit this museum, you can now take a little piece of this historical P-40 home with you! (Yes, I bought one!)

I’d like to end this post by thanking Dick, Jim, and Janet for their great hospitality and taking the time to play host to me during my visit. I’d also like to say ‘Job Well Done’ to all of them for all the progress they’ve made on this P-40!

Below, you can check out photos from my visit. The photos are displayed in a captioned ‘Light box’ format which allows for zooming in on individual pictures by clicking on them. The photos are followed by a video which presents a demonstration of several of the P-40 systems in operation. It’s a very cool video and I hope you enjoy watching the operational progress that has been made on this plane. After the photos and video, stay tuned for another FlyBoyz post showing what I found at the National Soaring Museum!

Enjoy the photos and video! 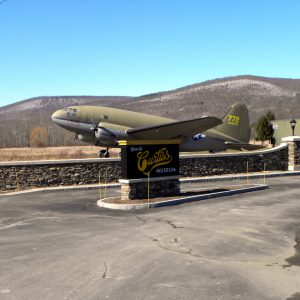 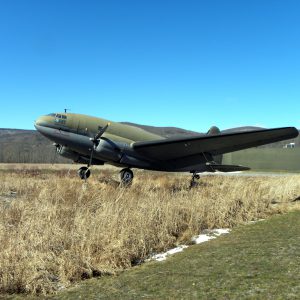 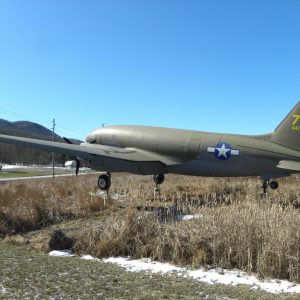 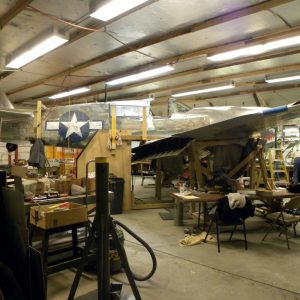 The scene when entering the P-40 Restoration Shop 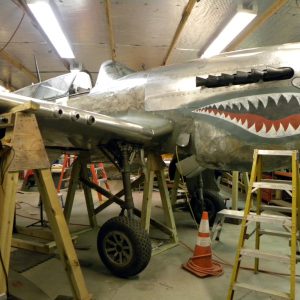 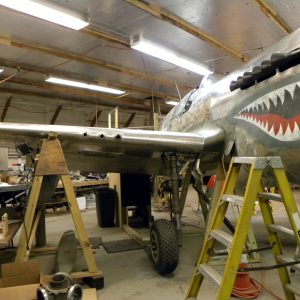 View down right side 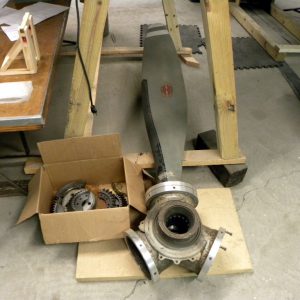 Propeller hub with one of 3 blades attached 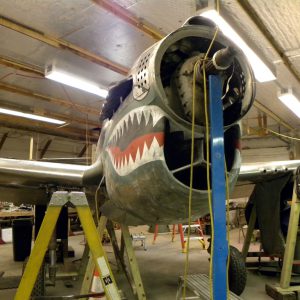 The business end of the plane 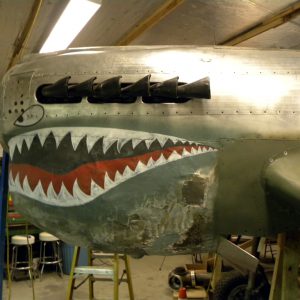 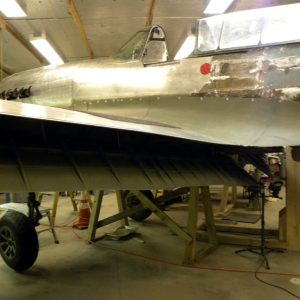 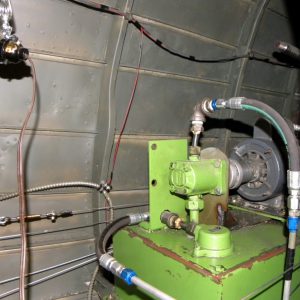 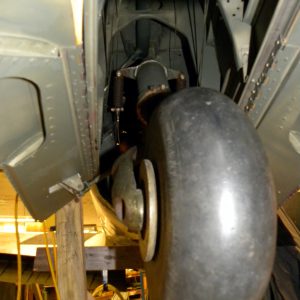 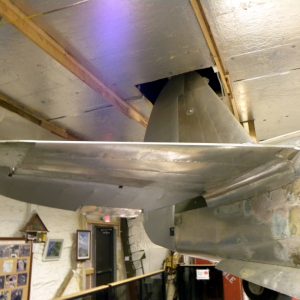 Making room for the rudder! 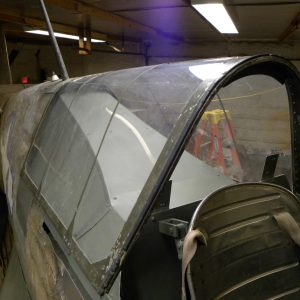 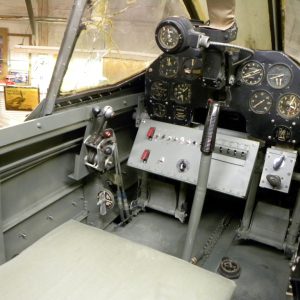 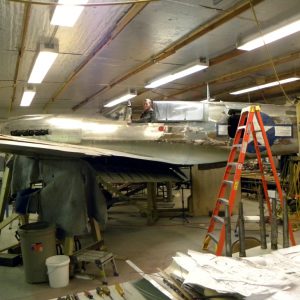 Me checking out the cockpit 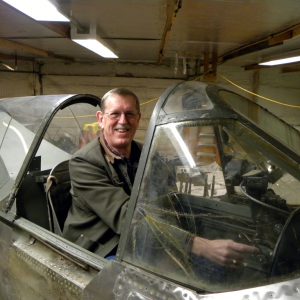 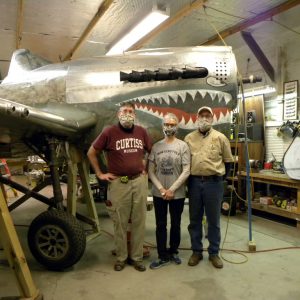 This FlyBoyz video presents a demonstration of several of the P-40 systems in operation. Enjoy the video!