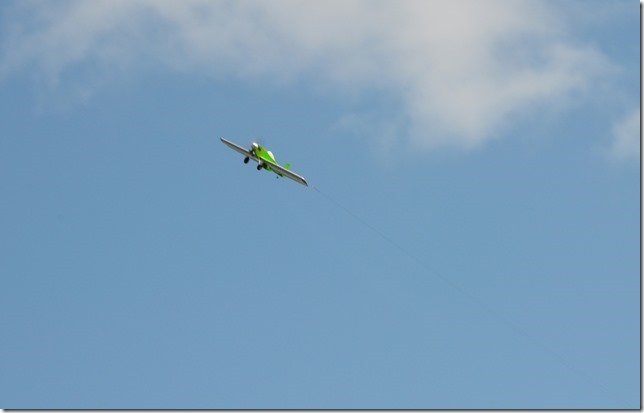 Sunday saw the maiden flight of the vintage Sterling P51D Mustang that I have been blogging about here on FlyBoyz. And it flew beautifully!

Veteran control line flyer, mentor, and FlyBoyz member Warren Wagner took point on the startup of the brand new OS Max-25LA-S engine. It ran great, strong and smooth for the entire flight…I like that engine!

FlyBoyz Flight Engineer Corey O’Neill took care of ground operations and got the plane off to a great launch.

The decision had been made to keep the first couple flights basically straight and level with no aerobatics so as to help break in both the engine and the plane (not to mention the pilots!). The Mustang tracked wonderfully with strong line tension and good flight control responses. I did deviate from the flight plan enough to try a couple mild wingovers and the plane performed them with no issue. It should be a good stunter once broken in.

And the 3.5 ounce gas tank made for a long engine run of somewhere around 7-8 minutes. In fact, I began to wonder if it would ever run out of fuel!

The flying field had standing water over approximately 25% of it so while takeoff was not an issue, the landing could be depending on where the engine quit. When the engine finally did quit, I was able to maintain enough altitude to glide the Mustang over the standing water and make a landing on solid ground (I love those flaps!). And I must say that I nailed the landing! It has been 39 years (1975!!) since I have flown a control line plane of this size and my first landing in those 39 years was over the water to almost a 3 point touch down! I don’t think I’ve ever had a better landing! And to prove how great it was (yes, I’m bragging here!), we have the video that shows it.

Corey had the honor of the second flight on the Mustang. It was his first flight on a plane of this size and it was only his 3rd control line flight ever (the first 2 being on the .049 Lil’ Wizard). He did a super job with his flight and was able to fully appreciate everything this plane has to offer over the .049 Wizard and he found it much easier to fly as a result. The Mustang should make a great trainer as I hoped it would. Corey managed to avoid most of the water trap on his landing but once back on the ground, during roll out, the plane caught a small puddle of standing water and flipped over. No damage done and a nice water bath to clean it up after the flight!

All in all, it was a very successful flying session with the Mustang, and Corey and I are looking forward to many more.

What follows are some great photos taken by STARS photographer and FlyBoyz member Michael Graham. Michael did a wonderful job capturing the events of the maiden flight including some great aerial shots of the Mustang in flight. The photos are displayed below in a captioned ‘Lightbox’ format which allows for zooming in on individual pictures by clicking on them. The photos are followed by a flight video shot and edited by Corey. The video depicts a portion of the maiden flight including that great landing that I nailed! Enjoy the flight! FlyBoyz publisher Mike O’Neill at the controls of the Mustang. The mustang in-flight and tracking nice and steady! Safe and sound after her maiden flight! (Although, it does look like that attaching bracket is needed for the fuel tank.)