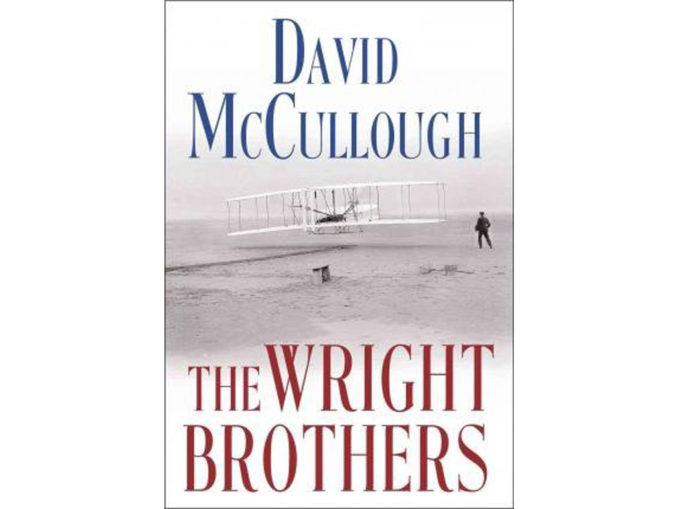 While visiting the Owls Head Transportation Museum in Maine a couple months ago, I picked up a copy of David McCullough’s recently published (2015) book ‘The Wright Brothers‘. I just finished reading the book. That is not to say that it took me two months to read this book, which would suggest a slow read on a boring book. Rather, I didn’t get a chance to start the book until about a week ago. And once started, I found it hard to put down. The fact that I am a very slow reader accounts for most of the week that it took me to complete it!

About two years ago, I published a post about ‘Birdmen‘ by Lawrence Goldstone (see post here: Birdmen). That book was essentially about the competition between the Wright Brothers and Glenn Curtiss and I was concerned that there may be a lot of overlap between the two books. Not so. In reality, ‘The Wright Brothers‘ proved to be an excellent companion book to ‘Birdmen’. The competition between the parties was not mentioned in ‘The Wright Brothers‘ until the final chapter and then only in the context of it being one of many issues or opportunities being faced by the brothers during the development and subsequent promotion of their aircraft.

‘The Wright Brothers‘ starts with the story of the brothers initial development of the ‘machine’ that would transform the modern world. The experimental period at Kitty Hawk shows the genius and perseverance of the two brothers who never falter even when conditions are horrid. Their goal is clear and their life is devoted entirely to it. The book then details their efforts to learn how to properly fly their airplane (mostly in secrecy) all the while making improvements to it. The many glitches and obstacles along the way never deter these men from the ultimate goal. They are truly driven to do this. It then concludes with their presentation of their ‘areoplane’ to the general public both in Europe and America. Although not initially received as well in America as they were in Europe, The Wright brothers do finally seal their fate in the USA and receive the recognition and financial backing they so deservedly earned. The story of the Wright brothers is told in detail and has been expertly researched to include a myriad of facts. The book presents the Wright brothers and their sister and father from a kind of diary perspective. We gain a lot of insight about their characters from this approach.

To follow their path from a bicycle shop in Dayton, to the sand dunes of Kitty Hawk and on to Europe to demonstrate their new “aeroplane’ takes the reader on a journey of extraordinary discovery. The book really gives the reader an eye opening account of the genius seed that grew into the world’s biggest transforming invention of the century.

The book also contains a wonderful selection of photos that accompany the narrative and that help to visualize the characters and events presented in the book.

David McCullough gets kudos for his wonderful research and his ability to put it all together so seamlessly and I heartily recommend this book to anyone with an interest in aviation or history.