So What’s Up? …Old Model Planes! 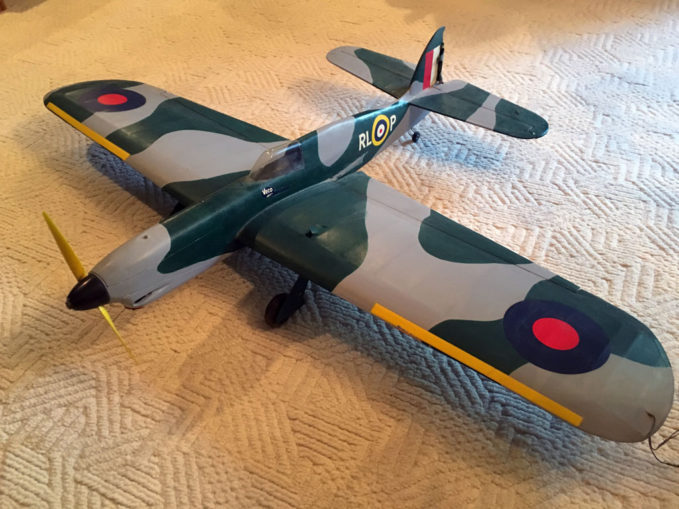 It has been kinda quiet here at FlyBoyz over the past 3 weeks. That’s because there have been a few things on the personal home front that have taken my attention away from aviation related activities. But that is not to say that absolutely nothing aviation related has happened, just nothing of a really dramatic nature that I thought would make interesting reading here.

Two weeks ago, I managed to crash my Ringmaster for a second time. The first time was about a month ago and was due to pilot incompetence while flying inverted. I rebuilt a portion of the wing after that crash. The second more recent crash was due to a faulty plywood bell crank mount that came loose during a loop causing the plane to dive bomb me in the center of the flying circle. I managed to avoid a very ‘up close and personal’ encounter with the plane but the plane suffered major tail and wing damage in the resulting crash. The plane was repaired yet again and trust me when I say that the plywood bell crank ain’t going no where at this point! The Ringmaster is looking a bit worn and somewhat worse for the wear, but it is actually flying better than ever now due to the various small trim adjustments I have made with each rebuild.

One exciting thing that happened is that I ‘inherited’ a beautiful old warbird! A local modeler, FlyBoy Jim Florini, was passing on the contents of his hanger full of planes due to a relocation to smaller facilities in another state. I was extremely fortunate to be ‘gifted’ a Veco Hurricane that Jim had built over 40 years ago. The plane has never flown but I’d like to change that status. There is some ‘hanger rash’ that needs to be addressed before the plane can fly, including repairing a broken rudder and patching some holes in the fabric covering. I sent Jim an email inquiring about the covering he had done all those years ago. Jim has a wonderful email writing style and he didn’t disappoint me with his reply:

My specialty was molecular endocrinology, not ancient history. So I have no idea of the specifics of the covering or paint was used way back then when I built that model and covered it. The adhesive was either concentrated clear dope or whatever glue was sold by the hobby shops back then.

My best guess is that I used something like silkspan, which is what was considered the best stuff in those ancient days (like the early 1970s), and I probably used the dope that was considered good stuff in those days. All I know for sure is that it hung in my study above a couch that was almost never used except when both daughters and their husbands came home for family Christmases, before my elder granddaughter was born. She graduated from Cornell in 2015, so you can see how long ago that was.

Here are a few photos of the current state of the plane: The plane came with a McCoy .35 stunt engine installed. The engine has been run in the past but not in over 40 years. I wanted to see if and how it would run so I put it on the test stand. With only a few flips of the prop it started right up and ran wonderfully as can be seen in this brief video. The engine will be re-installed in the Hurricane for the maiden flight.

During a flying session 2 weeks ago (where the Ringmaster crashed due to the bell crank issue) my FlyBoyz flying buddy, Steve Dwyer, also managed a rather dramatic crash of his own. As a teenager more than 50 years ago, Steve had built a flying wing, covered it with some sort of nylon fabric, and attempted unsuccessfully to fly it on several occasions. Recently, he decided to take the plane out from its’ attic home and see if he could successfully fly it all these years later. He mounted a McCoy .19 (which runs great!) on the plane and I offered to hand launch it for him.

The first two hand launches were not successful as I tried to figure out the best launch method while Steve tried to figure out how best to orient the elevator for launch. The third launch attempt was successful and Steve had his wing flying for the first time ever! I grabbed my camera and proceeded to record a few laps when Steve decided to try a loop. The video shows the results of that attempt!

Later analysis showed that the evaluator had failed during the loop, no doubt due to damage to the hinges that most likely occurred during the first two failed launch attempts. Damage to the plane was minor and Steve says he will get it ready to fly once again…he’d just better not take another 50 years to do so! Steve flying his flying wing for the first time ever…until it crashed!

So that’s what’s been up for the past few weeks here at FlyBoyz. Hopefully, I can get the Hurricane flight ready in short order and can report on a great maiden flight of a beautiful old warbird!