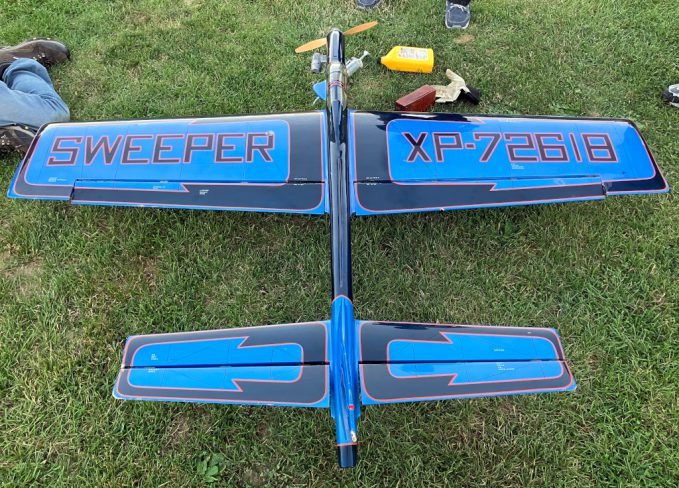 Windy Urtnowski is an iconic figure within the control line stunt world. Known as one of the top builders, flyers, and competitors within the sport, Windy built no less than 28 brand new competitive stunt models within a 30 year span. While Windy has retired from the hobby, some of his planes fly on. Including his iconic SWEEPER!

Windy built the SWEEPER in the late 1980’s. After Windy, the plane changed owners several times and has now taken up permanent residence at the Brodak facility in Carmichaels, PA. For the 2022 Brodak Fly-In, the SWEEPER was taken down from it’s display position and prepped for a celebratory display flight on the last night of the Fly-In. Dan Banjock was honored to be the pilot for the flight.

I don’t know a lot of specific details of the plane, but I do know that it is considered to be the largest single engine control line stunt plane with a total wing area in excess of 1,000 square inches. To say that this plane is a beast is an understatement. It’s mass was very noticeable during flight as could be seen by the centrufigal force that it put on Dan during the flight. Dan can be seen really ‘leaning-in’ and using both hands on the handle to control the plane. Nonetheless, as an Expert flyer himself, Dan was able to put the SWEEPER on display for some dramatic flying. Great job, Dan!

I captured a portion of the flight on video. Unfortunately, my phone ran out of battery power before the flight was done so this is an abbreviated flight video. Nonetheless, you can view this awesome plane going thru some of its flight pattern. Enjoy the video!