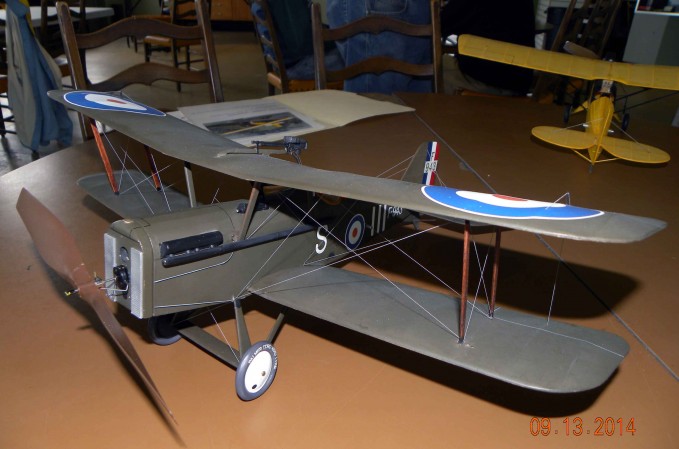 The Western New York Free Flight Society (WNYFFS) held it’s ‘Great Grape Gathering’ 2014 Free Flight Contest this past weekend at the National Warplane Museum airfield in Geneseo, NY. This was a 3-day event (Fri. – Sun.) of which I was able to attend on Saturday. And that was the wrong day to attend as the weather (rain and wind) put a huge crimp on flight activities throughout the day, especially those flight activities involving stick and tissue airplanes.

There was a small contingent of FAI Free Flight enthusiasts in attendance who were active even before the rains ceased. There was also ongoing activity (some more successful than others) from the gas powered free flight folks in attendance.

And a smattering of Flying Aces Club (FAC) stick and tissue planes did attempt flights late in the morning once the rain stopped but for the most part their activities were grounded.

As far as my Kharkov is concerned, I was able to complete final modifications to the front end of it in the hotel the night before my arrival in Geneseo. Here are ‘before and after’ photos of the front end.  The before photo shows the damage the front former (lower right corner) sustained after my last flight session. I ended up reconfiguring the entire former and nose block. This included replacing the crushed (lower) portion of the front former, enlarging the opening in that former, adding a new former to the thrust button, and adding hold-down magnets to both of these formers. Doing this gives me better access to the interior of the plane, distributes motor force across a larger frontal area, and helps hold the propeller/nose block assembly on to the front of the plane when there is no tension on the rubber band. I am happy with these modifications and they ended up not adding any weight to the plane. In fact, the CG shifted forward slightly which allowed me to actually remove a small bit of nose weight (located behind the front former). After the rain stopped, I did try two launch attempts with the Kharkov, however, the winds proved too strong and erratic and it was evident that the Kharkov would not be able to survive continued launches in the wind so I stopped trying.

The visit to Geneseo was productive in that I was able to have an enjoyable and very informative conversation with FAC’er Ted Allebone who discussed construction and finishing tips and techniques with me. Ted had an SE5-A on display that captivated me and I wanted to learn something about the construction and finishing techniques that he used on it. Ted was very willing to share with me and I am very grateful to him for spending so much time with me. I can only hope that my next scale plane comes out half as nice as his SE5-A!

Here is another one of the beautiful planes, a Korben Super Ace, that was set out for scale judging. I am looking forward to attending this event again next year…however, without the rain and wind!