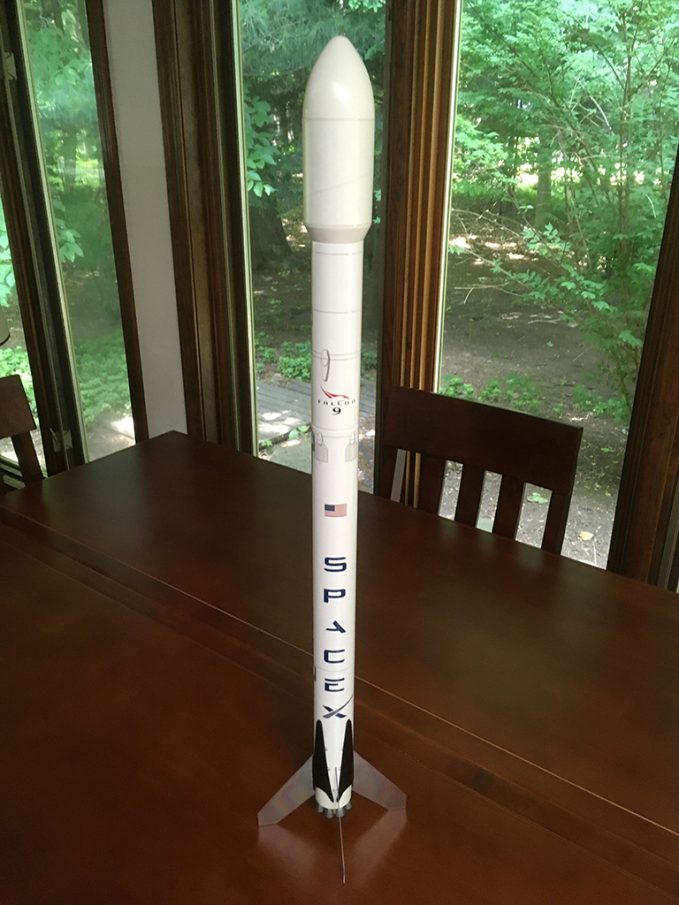 It is no secret to those who know me that I am a huge SpaceX and Elon Musk fan. So, when I recently became aware that SpaceX was selling a model of their Falcon 9 rocket, I had to get one. Once the rocket arrived, I spent a couple hours each night for 3 nights and completely built the rocket. As models go, it was a very easy build. This first photo shows the kit and what came in the box. I have built many Estes rockets and a couple Quest rockets so I knew what to expect when building this rocket. And I was fully expecting that one of those kit manufacturers was responsible for this kit on behalf of SpaceX. However, everything in the kit spoke to it being engineered and manufactured by SpaceX. I was very impressed by both the engineering of the rocket and the quality of the materials. They were far superior to those in any rocket kit I’ve built to date. I kept thinking that if this model rocket was indicative of the engineering and quality craftsmanship that goes into the real rockets that SpaceX builds, it is no wonder that they are so successful in the real-life rocket industry.

Having grown up during the 1960’s Space Race and having watched live the manned landings on the Moon, I was left with a lifelong desire to see the next step during my lifetime…Mars. I personally cannot think of anything higher on the priority list for Humankind than to see us become a multi-planet species. Many people, including Elon, have extolled the virtues of that goal and to date, I see Elon Musk as the best option for actually achieving that goal during my lifetime.

It has been more than exciting for me to watch the live rocket launches of Elon’s Falcon 9 rockets. And I follow with great anticipation his plans for developing the BFR (Big ‘Falcon’ Rocket) which is intended to take us to Mars. But believe it or not, what is most exciting for me during any of these live rocket launches is to watch the excitement and passion of his ‘rocket crews’ in Launch Control. I swear that not one of those SpaceX employees is older than 35! And to watch their excitement not only recaptures the excitement of my youth, it makes me feel confident that the current generation of ‘Rocket Scientists’ has the same inner passion for getting someone to Mars as I’ve always felt. They ‘Get It’. And that makes me confident that they will achieve in their lifetime what I can only hope will happen during mine.

Shortly after the kit arrived, my Father’s Day gift from my son Kyle also arrived. Unbeknownst to either of us, we were totally on the same wavelength. He had purchased me a SpaceX T-shirt with the Falcon 9 rocket depicted on it! We both chuckled over this great matchup! Here is a photo of me with the completed rocket and wearing the T-shirt. Tonight, Kyle asked me when I was going to launch the rocket, which by the way, uses ‘D‘ and ‘E‘ engines so any launch of it should be impressive! I told Kyle that for now I have no intentions to launch it as I have it on display with my other scale rockets. His solution to that was to declare that I need to build another Falcon 9 rocket so that I have one for display and one for launching. Did I mention that I raised a smart kid?!

Did I also mention that my Bucket List has a line item on it for watching Elon launch the BFR with the first ever manned Mars mission?