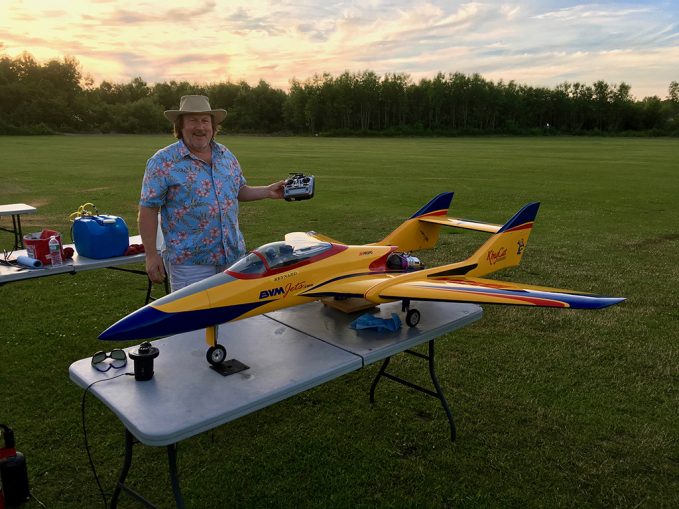 So while I was at the STARS field last Tuesday night trying to master another stunt with strings attached to my little plane, another club member was tearing up the sky with his R/C jet! Talk about opposite ends of the model aircraft spectrum!

Tom Polovick is a member of the STARS club who posesses a special license allowing him to fly jet powered radio control planes. And fly them he does. He is a very accomplished pilot and he and I frequently share the evening skies at the STARS. On this night, I finished up one of my control line flights and then decided to try and capture some of his flight action on video. I caught his flight in session and missed both his takeoff and arial smoke display but from my video you’ll certainly be able to see some of what flying R/C jets is all about. This was Tom’s last flight of the night as the sun was getting ready to set.

Tom is flying a KingCat jet powered by a JetCat P120 engine.

P.S. I did accomplish my new stunt…an outside loop (loop from inverted flight). On my last flight of the evening, I managed 5 outside loops. They were not pretty and need a lot of work, but I got over the mental hurdle of doing them and now I can begin to work at making them look acceptable.