Home Flight of the Hurricane

Flight of the Hurricane 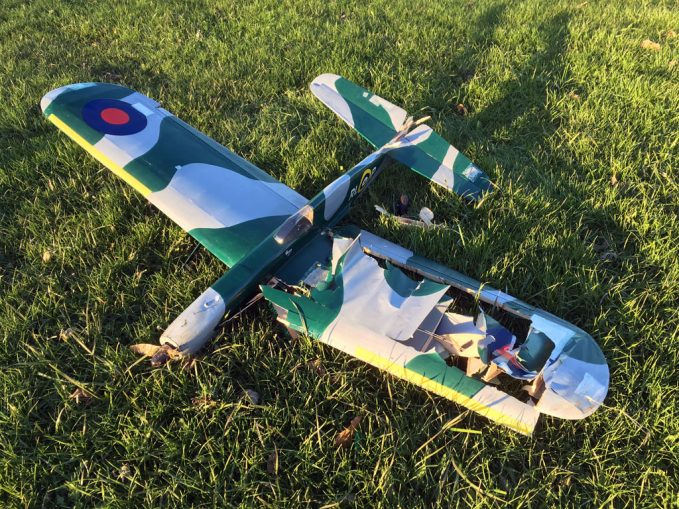 Three months ago, I published a post about a VECO Hurricane that I ‘inherited’ from a local modeler, FlyBoy Jim Florini. Since then, I have been very anxious to return that plane to a flight ready status and launch it on its’ maiden flight. With the upcoming end to the flying season, and approaching snows here in Syracuse, the urgency to conduct that maiden flight has been increasing. Unfortunately, schedules, events, and weather conditions have contrived to prolong the time that it took me to have everything come together for the maiden flight. Today, everything came together.

Before I could fly the plane, there was a bit of work involved in bringing it to a flight ready status. The 40-year old silkspan covering on the wings and flight control surfaces was very brittle and split or torn in many places. With the expectation of doing a full restoration on the plane down the road, I placed temporary silkspan patches over the torn areas.

Seen here are the results of my efforts to make the airframe airworthy for the maiden flight: Silkspan patches to top side of wing and tail Silkspan patches to bottom side of wing and tail Another item that needed attention was the engine. In my earlier post on this plane, I included a video of my successfully testing the McCoy .35 Redhead engine on a test stand. After that test, I mounted the engine back in the plane. The plane was also missing a fuel tank so I added a small 1.75 oz. fuel tank that I had lying around. My intention was to replace the fuel tank with a new larger one during the restoration. The small tank would work fine for the couple minutes of flight that I was looking to accomplish for the maiden flight. Here is a view of the engine and fuel vent lines installed and ready to go: In early October, with everything ready to go, I brought the plane with me to Rochester for the Annual Ringmaster Fly-A-Thon event. My intent was to conduct the maiden flight along with flying my Ringmaster. Unfortunately, the Hurricane did not fly that day as we could not keep the engine running. After a bit of troubleshooting by the entire Fly-A-Thon crew, it was determined that the fuel tank I had installed was clogged or otherwise defective and was not feeding fuel to the engine. So the Hurricane went back home flightless and I ordered a new 3.5 oz. fuel tank from Brodak.

With the new fuel tank installed, my next opportunity to fly the plane was on October 23rd. with my faithful wife, Dale, acting as my flight crew (something she has done on occasion over the almost 42 years of our marriage!). Once again, the Hurricane did not fly on this day. After more than an hour of unsuccessful attempts to get the engine started and keep it running, I took pity on my poor wife and decided to bag the flight attempt. After consulting with my control line mentor, FlyBoy Warren Wagner, it was decided that a new glow plug may be in order to get and keep the engine running properly. Warren even contributed a new glow plug to the cause…thanks, Warren!

Here is a photo my wife took at the field during the October 23.rd attempt: Finally, today, everything aligned and I was met at the flight field for the maiden flight by my flying buddy FlyBoy Steve Dwyer (BTW: are you getting the impression yet that getting this plane to fly is a group effort?!). The new glow plug and fuel tank did the trick as the engine started fairly easily and stayed running. With that hurdle overcome, we placed the Hurricane on the launch stooge so that Steve could video the maiden flight while I manned the flight controls. And without further ado, here is a video of the maiden Flight of the Hurricane!

Yes, the flight was over in less than 3 seconds! And the resulting crash obliterated the inboard wing and rudder/vertical stabilizer assembly. Steve and I are really at a loss as to the root cause of the crash. As can be seen in the video, the plane turned inward towards the center of the flight circle almost immediately after it was released from the launch stooge. The plane was built with no rudder or engine off-set and as best I can tell, with no outboard wing weight. All these circumstances could have been contributing causes to the inward launch. The plane was balanced along the main wing spar but that was a guess on my part as to where the CG should have been. Aerodynamics most likely had nothing to do with the initial inward turn, however, once airborne, aerodynamics most likely added to the situation. The entire tail of the plane was built out of alignment with the wing and that could have been a contributing factor. Also, we didn’t accommodate for the slight breeze that was blowing across the launch point. The wind direction may have added to the inward turn but it didn’t initiate it. Finally, the initial inward turn resulted in an immediate loss of line tension which I was not able to regain thus the plane was under its’ own control almost immediately after launch. Any thoughts (or guesses) from my FlyBoyz readership as to what went wrong would be greatly appreciated So now the question is…to rebuild or not to rebuild? As I mentioned several times, my initial intention with this plane was to do a full restoration of it. But that did not entail a full rebuild! And at this point, my concern is that any time spent rebuilding the plane may be wasted time if the inherent flight characteristics of this specific model (as built) are out of kilter. I’d hate to waste my time and efforts just to have them result in yet another crash. Yet, I’d also hate to waste all the time and effort that Jim originally put into the building of this fine looking plane. With a shelf filled with dozens of other plane kits calling out to be built, I’m thinking that this ‘Flight of the Hurricane’ may have been its’ one and only flight!