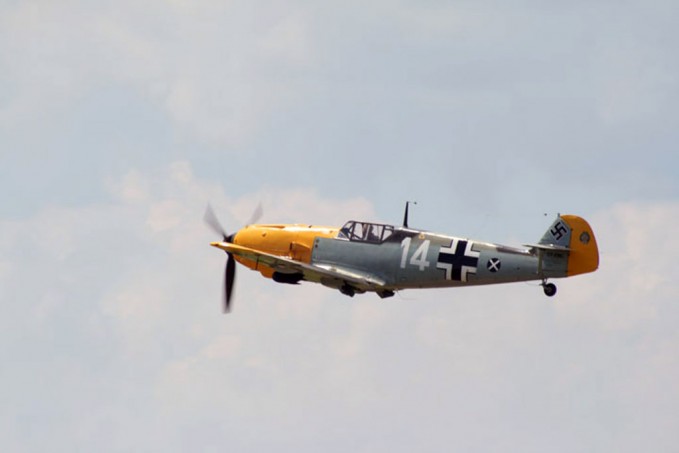 Last Wednesday, I was able to get away again with my Mustang for another control line flight session at the STARS club flying field. I met up there with FlyBoy Steve Dwyer who had brought along his recently restored ME109. This flight session was to be the the official ‘unveiling’ and ‘maiden flight’ of the ME109 which Steve had originally build over 50 years ago and had restored over this past winter. Steve did a wonderful job with the restoration as can be seen in these ‘before and after’ photos: Steve Dwyer with his restored ME109

With the new OS .25 in my Mustang performing great, I first put in an uneventful flight after which I turned the field over to Steve and his ME109. The next hour was spent trying to get the engine on the ME109 to run long enough to do more than 1/2 lap of the flight circle. Steve had installed an OLD Fox .35 engine he had into the plane and, while the engine performed well on the test bench, it failed to perform at the field. Steve finally decided that it was time to fully retire the FOX. Another engine will replace it in the ME109. After an hour of failed engine attempts, the ME109 was put aside and I offered to let Steve fly my Mustang. He refused stating that he didn’t want to wreck my only flyable plane. And so, I took to the controls again and determined to finally put the Mustang into inverted flight. Unfortunately, my flying skills were not up to the task. I decided to go inverted from the top of a loop. However, I started the loop too high and when I decided to come out at the top of it inverted, the plane was actually behind me and I temporarily lost my orientation. The Mustang came straight in from overheard and the prop and engine literally buried themselves 4 inches into the ground! My first attempt at inverted flight in 40 years ended in disaster!

The interesting part of this crash is that I had talked earlier in the evening about needing to recover the plane because the dope and paint combination I had used on it was not fuel-proof and was turning the plane into a sticky mess. Also, I had too much weight in the outboard wing tip and needed to correct that. As a result of the crash, it looks like I now have an opportunity to make some needed ‘minor adjustments’ to the Mustang! Despite the appearance of the plane in these photos, the structure appears to be repairable. With the silkspan fabric all torn, the wing looks worse than it may actually be. There are a couple cracks in the fuselage under the canopy but a plywood doubler glued to the current fuselage should fix those. The engine looks OK but the carberator is packed with dirt right now and it will all have to be fully cleaned before I can test it. With my workshop and tools still all packed away in boxes, the repairs to the Mustang won’t be happening anytime soon. With that in mind, Steve suggested I order an ARF from Brodak so that I’ll still have something to fly for the remainder of the flying season.

As an aside, this incident does remind me of why I switched to building model trains…they don’t crash like this resulting in a much less expensive hobby in the long run!

Later, I sent Steve an email in which I reviewed some of the events of the evening. I ended the email by joking that I was blaming the Mustang crash on Steve. Had he not declined my offer to fly the Mustang, I would not have made my last flight of the night with it and the Mustang would not have crashed! Steve, of course, responded in kind and what ensued over the next couple nights was the below email exchange. Enjoy the ‘Tall Tale’!

<<STEVE>> When you fly a P-51 in the same airspace with a ME 109 you have to expect some form of calamity and last night was every bit of that. As the Luftwaffe gained control of the airspace, Adolf was keenly aware his adversary was not on top of his mark. He positioned himself at 1 o’clock where the Mustang pilot lost sight and released several repeated bursts. Within moments the P-51’s wings looked like venetian blinds and down he went. Lesson learned, and an expensive one at that, keep your head on a swivel and never lose sight of what’s going on. Another American flag on the ME 109 – atta boy Adolf!! (Mike, And you wanted me to fly your plane!) <<MIKE>> Very good, Steve! But you got the facts wrong! In fact, Adolf and his ME109 never got off the ground due to a bad engine resulting from the Luftwaffe using old engines in an otherwise fully restored and maintained plane. The Mustang saw Adolf on the ground running scared from the oncoming air assault and it strafed the airfield. Adolf and the ME109 survived the attack but the Mustang was hit by a flak burst while pulling up into a victory loop over the airfield. The Mustang went down. Adolf was last seen running to the Mustang to try and secure the awesome allied engine from it to be used in his ailing ME109. (Final score: Allies 0, Luftwaffe 0)

<<STEVE>> As they always say “somewhere in the middle is the truth”. Adolf’s wing man, Gunther Weiss, happened to have his onboard camera rolling when the Mustang spotted Adolf on the ground attempting to re start his Diamler engine after performing a brief flight over the field. The Mustang pilot in his best effort to strafe the ME 109 inadvertently shot up a near by out house leaving him upon pull up disoriented and in a near inverted loop. Disappointedly he quickly realized his failure to maintain control resulted in either Gunther taking him out from above or Adolf getting him using his side arm as he passed by low after shooting up the pooper. Adolf was in fact seen running but not towards the Mustang, rather upwind away from the Mustang pilots accomplished shot up crapper. We’ll credit one Mustang for the Luftwaffe and one outhouse for the Mustang pilot (not much of a victory). This now remains undisputed.

<<MIKE>> Adolf was always full of crap…and so was his retelling of this epic story. The only crap that needed to be cleaned up after this incident was from Adolf’s pants. It is not known how they did it, but allied forces managed to recover the downed Mustang before Adolf was able to clean his pants and the engine was secured from falling into the hands of the Luftwaffe. The Mustang was examined from nose to tail. The damage looked worse than it was and it was determined that the plane could be restored. Examination showed that some fuselage reinforcement and wing rib repair would be the major components to be addressed…well within the repair capabilities of the Allied mechanics. It was also determined that some modifications would be made to the Mustang during the repair process. The outboard wingtip weight would be lessened and the entire wing and main fuselage would be re-covered with a new-fangled material called ‘Monokote’. The Mustang will fly again and is looking to once again scare the crap out of Adolf and his rubber band powered ME109.

<<STEVE>> Gunther Weiss has decided to come forward to set the record straight and recalls in detail the events that took place at the STARS Airdrome, his words are undisputable. He will challenge anyone claiming his story is bogus and prefers arm wrestling. As a member of the operational fighter wing of Jagdgeschwader JG 26 (the yellow nose ME’s) with the vision of a hawk and having been awarded the cross for the second highest number of kills ranking only second to Adolf, there is no question he saw the Mustang pilot go down after raking his wings using his 20 mm nose cannon. We find Gunther, who spends much of his time today at the local Bierstube, will attest he vividly recalls the Mustang pilot widely missing Adolf’s grounded ME 109 and splashing the mist haus. His final words to us as we left him “genug von minderwertigen Piloten” translated “enough from the inferior pilot”. He added, however, anyone that would shoot up a perfectly good mist haus and claim victory should be grounded. He wishes to discuss the matter no further (unless of course we are buying) and stated he is utterly disgusted with the American pilots and their over rated aircraft. A photo of Gunther as we found him is attached. There is no way I could top that last reply from Steve, so I decided to put this story up to my FlyBoz readers for their learned interpertation of it. Now my question to you FlyBoz readers is: What does it say when two grown aviators engage in such an exchange?!