Home Shall we play a game?

Shall we play a game? 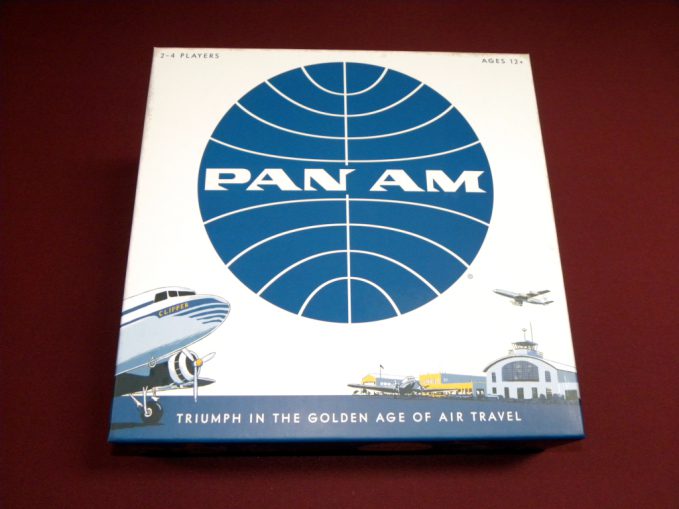 Besides model building and flying, one of my other hobbies is playing games. Now, I’m not talking about your garden variety Monopoly, Scrabble, or Candy Land type games. And I’m not talking about video games. No, I’m talking about board war games. These are typically very sophisticated tactical or strategic military or economic games that many times are simulations of real historical events or conflicts. These games can take hours (or weeks!) to play and can cost into the hundreds of dollars to purchase so they are not for your typical Sunday afternoon gamer. Despite the cost in both time and dollars, I play these games because I enjoy the intellectual challenge and competitive play that they bring with them and to that end, I host a monthly ‘Gaming Night’ with a local group of like-minded gamers. One other aspect of these games is that many of them can be played solitaire (or ‘solo’ as it’s called in the hobby) which lends them to be played when competitors, worthy or otherwise, are not available for a gaming session. Here is a photo of one of my gaming shelves with a sampling of some of my games: 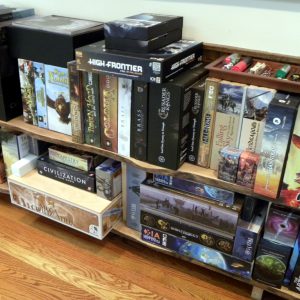 One of my gaming shelves with some of my current games

So by now you are asking, ‘so what does this have ANYTHING to do with aviation?!’. Well, many of the war games that I have are aviation related. Through my games, I can re-fight the Battle of Britain, or launch various attack aircraft off the decks of aircraft carriers while defending the island of Midway in WWII. I can also climb into the open cockpit of a WWI biplane and go head to head with the Baron in Richthofen’s War. Or, I can launch an interstellar spacecraft and colonize the planets of our solar system or engage in great intergalactic battles with alien spacecraft. Aviation and aerospace are very well represented in the games I play!

I am always on the lookout for aviation related games that fit my particular interests. Recently, through the YouTube channel of a great Free Flight modeler (Thank You, Maxfliart!), I became aware of a new aviation themed game and that is what is presented here…Pan Am. This game falls into a category of board games referred to in the hobby as a ‘Gateway Game’. Meaning that it is more sophisticated than a typical family board game but not so involved that it scares away the faint hearted. It is meant as a ‘Gateway’ or a stepping stone into the bigger realm of modern board games. As such, for those that are familiar with the hobby, this game hits me as somewhat of a cross between Acquire (a classic financial stock accumulation game) and Ticket to Ride (a currently popular route building game).

In Pam Am, you compete with Pan Am and other players as the head of your own fledgling airline. You expand your fleet of planes, build airports, outbid rivals for landing rights, and create your own globe-circling air system. You play through decades of air travel history alongside ever-growing Pan Am, make a fortune when they buy your routes, invest in Pan Am stock when it’s cheap, and try not to get pushed out of the skies by your competition. The game can be played by 2 – 4 players, ages 12+, in about 60 minutes. And this game is very affordable. It is available at both Target stores (where I purchased my copy) and Amazon for $24.

Below are a couple photos which show both the game board and the game box with all the various game components. I’ve also included a photo with the game set out on my gaming table. Yes, I even have a dedicated, official ‘Gaming Table’ to play my games on!

So if you are looking for something a little different to do, yet still want to stay within the realm of aviation, I might suggest that you check out a copy of Pan Am. It just might lead to a whole new area of interest…board games! 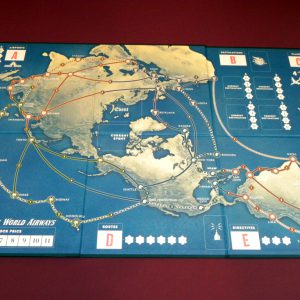 The playing map board for Pan Am. 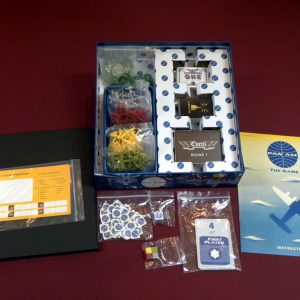 The rules, box of components, and folded up map board for Pan Am. 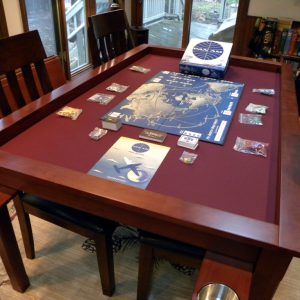 My game table with PAN AM set out on it.