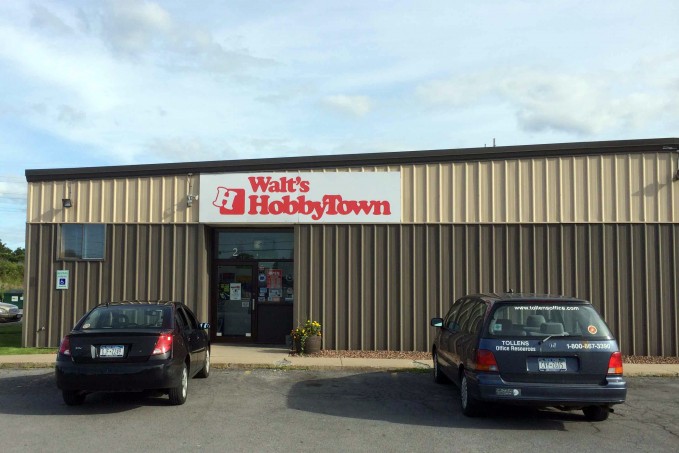 I was first introduced to Walt’s Hobby 11 years ago when I moved to Syracuse and found them located right next door to where I was working. How convenient! Even though I don’t work next door to them anymore, I’ll now get to enjoy that same convenience…Walt’s is moving online!

For the past 38 years, Walt’s Hobby Inc. has been an icon of the modeling world in Upstate New York. Started in 1975 by Walt Throne, Walt’s supplies modeling needs for all types of modelers from its Syracuse, New York location. Two years ago, Walt and his wife Jan retired from the business and it has continued on under the ownership of their son Bruce. And now, as of August 1, Bruce has teamed up with HobbyTown, the national chain of over 160 hobby stores, to bring the local hobby shop to the next level.

“Retail has become more challenging than ever. Co-branding with HobbyTown allows us to keep the Walt’s name while gaining the support of a well established national chain!”

By co-branding with HobbyTown, Bruce will be able to call upon the resources of a national chain to help him better serve his local customers while at the same time extending his market reach thru the addition of new ecommerce sales and marketing capabilities.

Bruce stated that the advantages of co-branding with HobbyTown include: Under the banner name Walt’s HobbyTown, Bruce intends to continue selling the same mix of products that Walt’s has traditionally been noted for, specifically all things related to model airplanes, R/C cars, model railroads, rockets, and plastic model kits while at the same time beefing up the stores offerings across the board. Walt’s will continue to provide the most current hobby products while stocking many traditional favorites. But clearly, one of the most exciting aspects of this new relationship with HobbyTown, is that it allows Walt’s to move online via a new e-commerce site. Bruce stated that this new online capability “allows us to be modern and reach the CNY (and national) market online”.

And I am thrilled to feature Walt’s HobbyTown as an advertiser on FlyBoyz! Check out their ad at the top of the page then click the ad to be taken directly to their new e-commerce site!