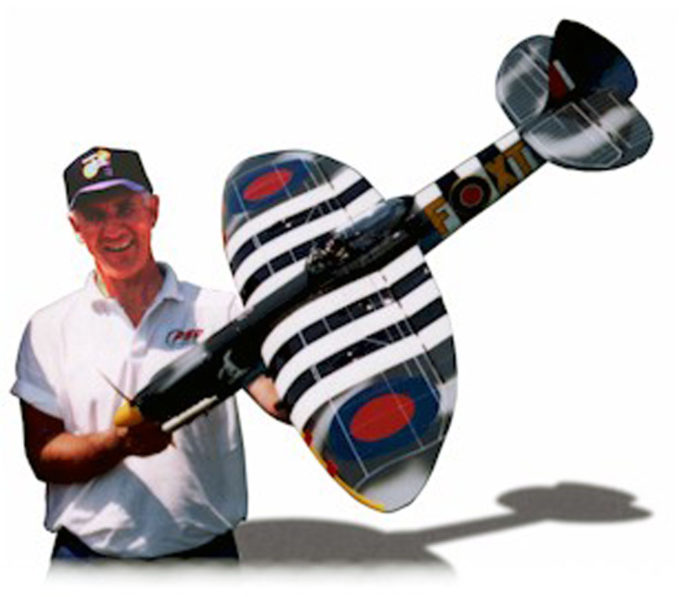 It is interesting how, sometimes in life, events can pass you by without your knowledge. When you become aware of them at a later time, they are ‘new’ to you but ‘old news’ to many others. For me, the most dramatic instance of this happened while I was in Marine Corps boot camp. For 13 weeks, we had no contact whatsoever with events transpiring in the outside world other than what may have been written to someone in a letter from home. One week after I entered boot camp, the 1972 Munich Olympics terrorist attack happened on Sept. 5. By the time I graduated boot camp and reconnected with the world, in late November 1972, the Munich events had receded from the headlines and been replaced by other issues, thus I was unaware of them. Years later, when the topic came up in a conversation, I had no idea what was being talked about. Subsequent investigation on my part showed that my knowledge of these events was a victim of my boot camp news blackout. When I finally learned about this event, it was no longer news but it constituted ‘news’ to me.

I have written here in FlyBoyz about my absence from the model aviation hobby for many years. During those years many events and advances in model aviation technology occurred and I am still playing catch up with all that went by during my years away. Several times, I have learned of something that passed me by and while I was excitedly learning about it, others were declaring it to be ‘old news’. Recently, I had this happen to me all over again. I was introduced to Winfred (Windy) Urtnowski by one of my control line friends and since then I have spent many hours over the past couple weeks trying to play catch up with all that I missed concerning Windy during those years away.

Now the last thing that I’d want Windy to think is that he is ‘old news’, but for me it took a bit of catching up to find out what he was all about. Windy was a hallmark of the control line stunt world for many years. He was one of the nations top rated control line stunt flyers and his model building skills placed him at the top of the building contest scene for many years. In 2003, he was inducted into the AMA Model Aviation Hall of Fame. Windy will always be remembered for those accomplishments, but to me, his most lasting legacy may be the videos he has left behind on building and finishing model airplanes. And he has left just a few of these videos behind…hundreds of them! What is exciting about these videos is that, while many of them were filmed during the 1980’s and 1990’s (when VHS tapes were the prevailing media to be followed by DVD’s), many of these videos are now being placed on Youtube for the entire world to view and enjoy them. 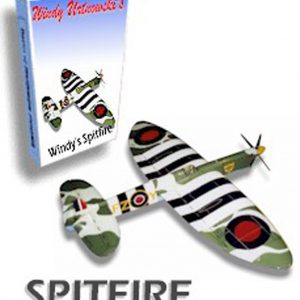 I have been particularly captivated by the series of vides that Windy published in the 1990’s related to the building and finishing of his award winning ‘I-Beam’ Spitfire. Not only is this a model of my favorite airplane, the Spitfire, but it has to be the most beautiful model I have ever seen. The finish on this model is beyond compare. This screen shot from a scene in one of the videos does not really do the model justice but it gives you an idea of what I’m talking about. 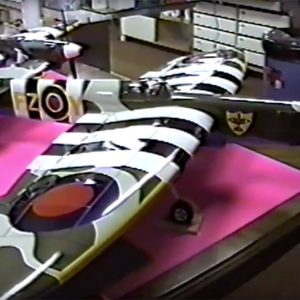 One of the things that Windy talks a lot about in his videos is his desire to share his knowledge and skills and to help others learn how to build and finish model airplanes like he does. I don’t know if Windy has ever heard of or read about anything in FlyBoyz, but if by some chance you are reading this post now Windy, I want to let you know that I am in awe of your model building skills and craftsmanship. And I really appreciate all the time and effort you spent recording and sharing all your knowledge so that others could learn from it. I am learning a ton of stuff from you and I’m sure others will also do so for years to come. Thanks, Windy! 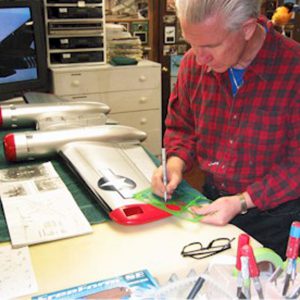 Windy Urtnowski at work in his shop