Home Modeling – The Year in Review

Modeling – The Year in Review. So what did I actually model this past year?. 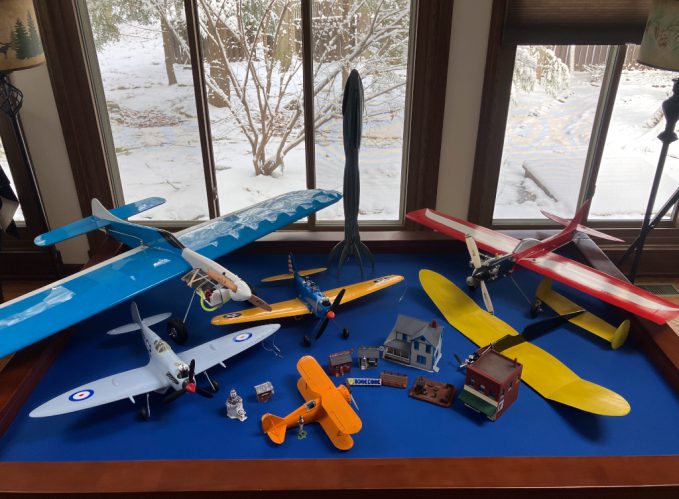 With everything going on in life, I often feel like I’m not getting much time to do a whole lot of modeling let alone complete many of my ongoing modeling projects. So, I decided to take a step back for a moment and take inventory of just what modeling projects I actually completed this year (2022). I was a bit surprised by the actual results of that inventory.

From a modeling standpoint, this blog focuses primarily on my model airplane modeling activities. This past year, those activities were primarily focused on plane restorations as opposed to new plane construction. I started out by fixing up two planes that I was gifted by a local hobby shop (A Couple of Freebies). One of them, the Top Flite Streak Trainer is now in need of some additional repairs as it did not clear a loop I was performing with it. It will fly again! 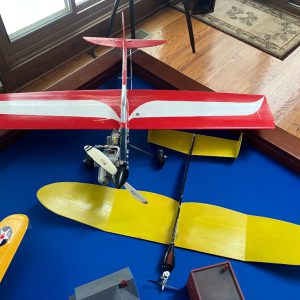 Then there were two plastic COX .049 powered planes that I restored, a PT-19 ‘Flight Trainer’ (Before and After) and a Supermarine Spitfire (Two Become One). Both of these planes came out great and now look good hanging on display in my modeling workshop. I would be open to adding to this particular collection a couple more carefully selected .049 plastic models that I could first restore. 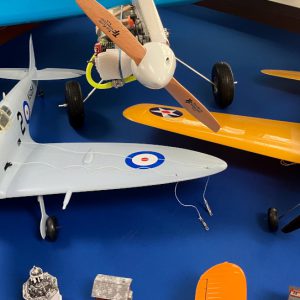 My final airplane completion this past year was the SIG Banshee restoration (Banshee Refresh). I have flown this plane a couple times and it is a nice flyer. I expect that it is one that I will take more often to the flying fields in the future. 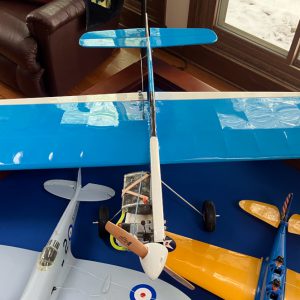 I built several wooden structure kits and one plastic structure (the farmhouse). I also built a couple wooden barges as well as a small rooftop billboard. 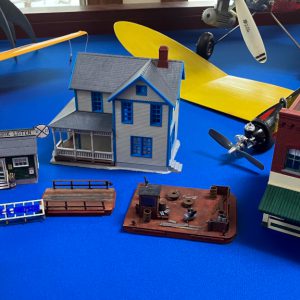 I also built a couple Z-scale structure kits this past year. For decades now, I’ve wanted to build a Z-scale briefcase layout, and I actually started it this past year. I will be modeling a Winter scene so I made my first attempts at both Z-scale modeling and modeling structures with snow on them. The results were ‘OK’. 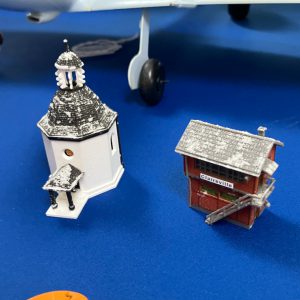 I hope to expand my railroad modeling activities into building both plastic and resin HO-scale rolling stock kits next year.

My most recent foray into rocket modeling was earlier this year when I built the Estes Vesta Intruder (Vesta Intruder). I was generally pleased with the build until the very end when I mistakenly used enamel paint over acrylic. It resulted in some paint bubbling on the body tube but in the end, it looks like textured skin on the rocket so I decided not to repaint it. 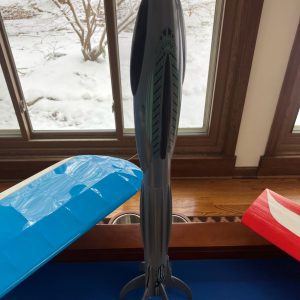 There were two rocket builds that are not displayed on the game table in this post’s Featured Photo. That is because I built these two rockets for a couple grandkids who now have them on display in their bedrooms. With each of these builds, I decided to add something a little extra in an effort to expand my building skills. When the kids get older, I hope to watch them launch these! Here are photos of them: 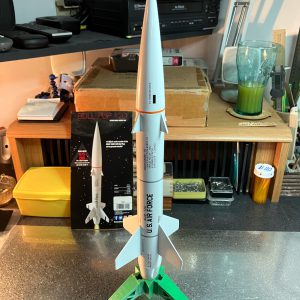 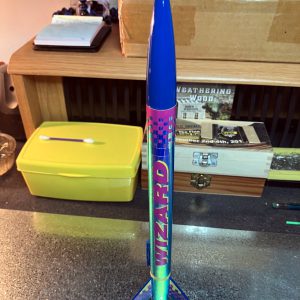 My last completed build this year was mentioned in my last FlyBoyz post about modeling plastic airplanes (Plastics!). In that post, I included a photo of the Grumman Gulfhawk that I was working on. I have since completed that plane kit. As I mentioned in that post, this kit was partially built and unbuilt by another modeler which presented me with some building challenges to overcome. For the most part, I did that. The plane was completed without decals as the 60+-year-old decals in the kit were toast but the plane looks OK without them. This build accomplished its goal of reintroducing me back into the world of plastic kit modeling. I’m looking to do a lot more of that in 2023. 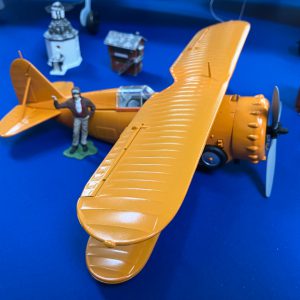 So by my count, that is 18 projects I brought to completion this past year. That averages about 1 completed project every 3 weeks. I’m not in this to keep track of quantities or to try and prove how prolific I can be at my modeling, but rather, as a gauge of my modeling activity. I was a bit surprised to find that I was actually quite productive with my modeling this past year despite how I may have felt as the year went by.

It is obvious in this post that my modeling interests are many and varied. I have said before in my blog posts that I consider myself a ‘Jack of all Trades’ and ‘Master of None’. That’s okay because I really enjoy the variety of modeling topics and types of modeling that are represented here in this post. If I get tired of working in one medium, I just move over to another for a spell. In each case, I’m still modeling and that’s what I really enjoy. And, after all, that’s what hobbies are supposed to be about…doing what you enjoy.